The postponement of three top-end paintings and objects sales meant that the overall total generated by Christie’s latest ‘Classic Week’ in New York was well down on previous years. The seven sales of Old Masters, 19th century art, sculpture, antiquities, books and manuscripts were originally due to take place as live events in April but, due to the coronavirus crisis and subsequent lockdown measures, were rescheduled as online-only timed auctions that ran from June 2-19.

The overall total including premium was $13.4m (£10.9m), a figure which compared to $79.5m raised by the equivalent sales last year and $60m for Christie’s Classic Week in October.

The main reason for the dramatic drop-off was that the most lucrative sales of the current series were pushed back until the autumn when they are intended to be staged as live auctions. The Old Masters part I sale, the Exceptional sale and the single-owner auction of the Wrightsman collection are now planned for October although the exact dates are yet to be confirmed.

Christie’s were keen to point out however that the seven online sales that did take place witnessed more international bidding with 43 countries represented among the participants compared to around 34-36 normally at these events.

The Archaic Period bronze form represented the most successful helmet-type of its day due to both its functional qualities, leaving only a small area of the warrior's face exposed, but also for its aesthetic elegance. The type was described by Dr Mark Merrony of the Mougins Museum of Classical Art as “a masterpiece of the armourer’s art with a high domed skull, gracefully curving cheek-pieces and a slender nasal-guard”. It also demonstrated how Greek craftsmen had learned to fashion helmets from a single piece of bronze rather than two halves welded together, giving them greater strength.

As well as its rarity, the commercial appeal of this example was also enhanced by the attractive state of its azurite blue and malachite green patina.

The 54-lot antiquities auction as a whole raised $1.95m. While four lots were withdrawn after it emerged they were mentioned in documents relating to looted art, another lot bringing good competition was an Attic neck-amphora attributed to the Bareiss Painter, c.530-520 BC, that overshot a $40,000-60,000 estimate and sold for $110,000 (£89,000). 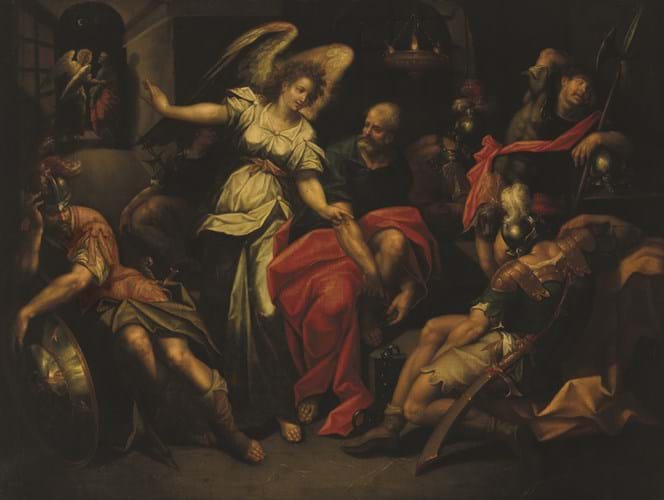 It was led a large-scale biblical painting by Jacob de Backer (c.1555-c.1585), a short-lived but prolific Mannerist painter active in Antwerp during the final quarter of the sixteenth century.

The Liberation of Saint Peter, a 3ft 10in x 4ft 10in (1.12 x 1.57m) oil on canvas, was formerly believed to be by Otto van Veen until the art historian Jacques Foucart reattributed it to Jacob de Backer. It had been acquired by the parents of the private vendor at an auction in The Hague in 1950 which meant that it had market freshness in its favour