Our weekly selection from salerooms. Please note, due to the rescheduling of events in relation to the coronavirus outbreak, we strongly advise any bidders to check in advance that the auction will take place as planned. 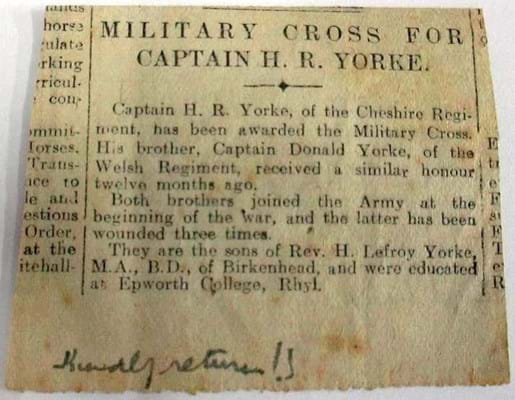 A First World War Military Cross, awarded to Captain Harry Roy Yorke of the Cheshire regiment in November 1917 has a guide of £800-1200 at Unique Auctions in Lincoln on March 27-29.

It comes with various related ephemera including a telegram inviting Yorke to Buckingham Palace and related press cuttings. One article records that Captain Yorke’s brother Donald had also received an MC for conspicuous gallantry a year earlier. Both men were educated at Epworth College in Rhyl.

unique-auctions.com or see this item on thesaleroom.com

This gold, diamond and enamel brooch above, modelled as a dog’s head (possibly a Griffon Bruxellois), was originally retailed by A La Vieille Russie of New York. It has an estimate of £800-1200 at JS Auctions in Banbury on April 16, part of a Selected Jewellery and Silver sale.

This Distinguished Service Cross and Bar group above is engraved to Lt Douglas Lambert for daring, enterprise and devotion to duty in successful patrols in HM Submarines.

He received his DSC for service on HMS Surf in ‘Northern Waters’, in the Aegean and in the Far East. His Bar was earned for sinking by gunfire a fuel lighter and tug sighted west of the Aroa Islands on March 5, 1944.

The first 20 lots of the football memorabilia sale at Stacey’s in Rayleigh, Essex, on March 30 come from the family of the Derby County, Chelsea and England player Benjamin Warren (1879-1917).

Included are his first full international maroon cap (for a game against Ireland in Belfast in February 1908) sold together with the cloth ‘three lions’ badge from his shirt and original photographs of Warren and his team. The estimate is £850-950.

Warren emerged as one of England’s highest-rated half-backs, playing 22 games for his country. However, his mental health suffered after an injury threatened his career. He was admitted to an asylum in Derbyshire in 1912 and died there of tuberculosis in 1917.