A portrait of a gentleman standing beside a framed portrait of a lady which was catalogued as ‘Italo-Flemish school, 17th century’ at Sotheby’s online sale of 100 works from the Rafael Valls gallery. It led the auction at £220,000.

With online sales becoming the new normal for auction houses and with the trade facing the obvious difficulties of selling from galleries during a lockdown, it might not seem surprising that Sotheby’s should hold its first internet-only sale of Old Masters devoted to a single dealer during this time.

However, the auction of 100 works from London dealer Rafael Valls was arranged, catalogued and promoted well in advance of the coronavirus crisis.

When it was announced in early March, it was made clear that the motivation behind the sale for both dealer and auctioneer was about reaching new buyers – using the ever-developing digital platforms in this most traditional of sectors.

For Sotheby’s, it was “a unique opportunity” to offer “high-quality works chosen over the course of an entire career by one of the most esteemed Old Masters dealers in Europe”.

For the gallery, it was a chance to present a select group of works “reflecting Rafael Valls’ taste and eclecticism to a wider audience”.

Sotheby’s has been holding online Old Masters sales since in 2017 and has noticed these offerings tend to attract a higher proportion of new clients than traditional live auctions.

The Valls sale was no different, with 30% of bidders being new to Sotheby’s, with a similar proportion of works selling to first-time buyers.

The sale itself was a timed auction that ran from April 1-8. While holding the physical viewing was not possible, detailed condition reports were available on every lot page and each entry had a link to a shipping calculator tool.

By the time the auction closed, 98 of the 100 lots had been sold for a premium-inclusive £1.6m – well above the pre-sale estimate of £405,100- 583,700 (based on hammer prices). Sotheby’s said the buyers were almost all private collectors. The sale also posted an impressive 14 artists’ records. Each lot attracted an average of 16 bids with participants coming from 29 countries.

Toby Campbell from the Raphael Valls dealership told ATG: “The results were certainly very pleasing and very gratifying too. We would certainly consider doing it again but we are wary of overstepping the mark and flooding everyone with too many sales.

“The mutual respect that dealers and auction houses hold for one another was a natural route for us to take. Auction houses currently have considerably better resources and online platforms than dealers do, especially in the Old Master arena. Their help was invaluable in helping to make the sale a success.”

Both Campbell and Sotheby’s head of Old Master paintings Andrew Fletcher believed the results showed how demand for Old Masters was holding up during the lockdown. The former, though, also pointed out that, with the bulk of the works fetching under £25,000, it showed the “amazing value” even for good examples of 17th century painting.

There was even a sense that the sale found greater appetite from buyers starved of other purchasing opportunities at the moment.

“Online sales in general seem to have gained a major boost because of the lockdown and may continue to grow now that people have got to grips with how easy it is to sit at home and bid,” said Campbell.

“However, this may be to the detriment of bidding in person in the saleroom which has the atmosphere of the room to carry the sale to higher heights.”

The works on offer dated from the 16th to the 20th centuries and were amassed over Valls’ long career in the business. They were selected to show both the eclectic spread across the gallery’s stock and also to represent some of the areas that it is best known for, such as trompe l’oeil painting.

Valls himself has spent nearly four decades as a dealer and his St James’s gallery, which he owns and runs with his wife Caroline, specialises in Dutch, Flemish and Spanish works.

The gallery’s stand at the annual TEFAF Maastricht is often a keen topic of conversation at the fair, such as when it was inventively designed to resemble a 17th century Dutch interior.

The top lot of the Valls/Sotheby’s sale was an intriguing 17th century portrait of a man standing beside a framed portrait of a lady. Effectively a double portrait, it was catalogued as ‘Italo-Flemish school’ as it appeared to combine both Flemish and Italian elements.

The type of frame depicted for the lady’s portrait, for instance, called a cassetta, originated in Tuscany in the 15th century but later became very popular throughout northern Europe.

However, at least one fellow Old Master dealer felt the painting was more Flemish with less significant Italian influence and, although the catalogue suggested that it was reminiscent of paintings by Frans Pourbus, the Antwerp-born artist was never a name entertained by Valls.

The gallery had bought it at Sotheby’s New York in June 2013 for a premium-inclusive $56,250 (£36,235) and had it cleaned. The picture revealed was a finely executed work and the underlying condition of the 3ft 5in x 3ft (1.04m x 91cm) oil on canvas was fairly good and original, although it had an understandable amount of wear and restoration for a work of its age.

Although the folded letter next to gloves on the table probably once identified the sitter and perhaps the painter too (the name ‘Cesare’ is legible but the rest of the inscription was tantalisingly indistinct), an attribution proved elusive.

The fact that artist, sitter and subject remained a mystery – was it a betrothal painting or an allusion to the man’s wife having passed away? – appears to have given it an enigmatic quality that ignited interest. Fletcher said: “It was simply a very chic and somewhat moving image in tune with today’s taste.”

Did the huge price suggest that bidders had an artist’s name in mind? Perhaps, although Campbell said: “If someone thinks they have a better idea than us, then all credit to them.” 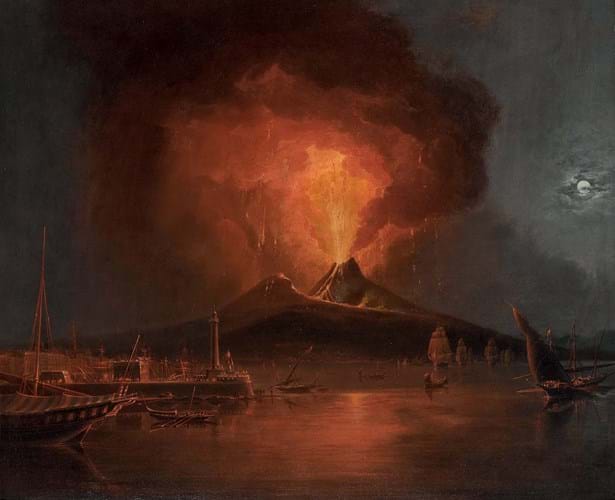 The 2ft 1in x 2ft 6in (63 x 76cm) oil on canvas was an unusual work for the artist who was better known as a topographical painter and watercolourist. He was also a marine specialist and for a few years held the appointment of marine painter to King George III.

Works by Whichelo do not appear on the market very often in any case and seldom with such a Romantic subject and painterly effects, although the precise details of the port were more in keeping with other known works.

The good condition of the picture added to its rarity in enhancing its commercial appeal and it eventually sold at £55,000 to a private collector.

That price eclipsed the £52,000 for a pastel portrait of Admiral Lord Nelson sold at Sotheby’s in July 2013 in terms of the highest sums at auction for the artist.

Attracting nearly 40 bids at Sotheby’s/Rafael Valls sale, A stroll under the cherry blossom, Kyoto by Spanish artist Pedro Ribera (1867-1932) was one of a small number of 20th century works at the auction. 'A stroll under the cherry blossom, Kyoto' by Pedro Ribera – £14,000 at the Rafael Valls/Sotheby’s sale.

The Madrid-born artist, who later settled in Paris where he trained under Léon Bonnat and Albert Maignan, travelled widely from 1900-30, visiting South America, north Africa and the Far East. This diminutive but evocative work captured the blooming cherry blossom in Kyoto, known to flower only for a short period in the spring and therefore often symbolising the transience of life in Japanese art.