Alan Hewer of Seaford, Sussex, is a book collector who has turned a personal collection into a resource for others. Alan Hewer in front of an array of First World War books complete with dust jackets.

A Google Scholar with 137 published papers on cancer research, Alan Hewer took early retirement “because I was spending too much time looking for books”.

“I used to set up experiments which took a few days to run and in the meantime, I’d nip out to bookshops and the saleroom called Debenham Coe which later became Christie’s South Kensington,” he says.

Along the way he built up an impressive 3000-volume collection of books concerning the First World War. He was ahead of the crowd in realising the importance of the beautiful yet fragile dust jackets and built an award-winning website to show them. Hewer is still adding images on an almost daily basis to his website.

ATG: What got you interested in the First World War as c ollecting area?

Alan Hewer: I grew up in Swindon and a favourite aunt, Mabel Baldry, had been a nurse at Greylingwell Hospital near Chichester during the Great War. There she’d met a convalescing young officer, Edwin Baldry of the North Staffs, whom she’d married.

After a short honeymoon he went back to the front but was killed on the Somme in 1918. Along with his photograph she had his Sam Browne belt, a German bayonet and that stalwart of many war-time nurses, an autograph book full of poetry and pictures by the officers in her care.

I became fascinated by the war and wanted to read more about it. In those days, the early 1960s, there was actually very little available, even in the public library. Interest in the First World War had faded due, of course, to the Second World War. So this meant buying in second-hand bookshops. When did you begin to focus on dust jackets?

Most of the books I found didn’t have jackets. It’s often said that booksellers in the 1920s-30s routinely discarded them before handing the book to the customer. Personally, I’ve always been rather dubious about that. After all, if it was standard practice why would the publishers have carried on supplying them?

It’s possible they produced a few jacketed copies for display and left the rest uncovered but it’s more likely that the scarcity is just down to normal wear and tear. Let’s face it, we’re talking about a slip of paper wrapped around a book a hundred years ago.

The few I did encounter were often quite striking in their design so I used to buy those in preference, as long as the price was OK.

What are some collecting highlights?

My copy of All Quiet On The Western Front was £3 from a shop in Brighton. I’ve seen ones like it at ABA book fairs for £3000. I’ve also got a little pamphlet penned by Rudyard Kipling and issued to the American forces to welcome them to the war. Apparently 50,000 copies were printed yet there are just five known now, all in American University libraries. I’ve got the sixth, snapped up from an unsuspecting dealer on AbeBooks for about twenty quid.

The most expensive book I’ve bought is Issac Rosenberg’s Moses which set me back £550. 'To Fighting Americans' – a pamphlet issued in large numbers to expeditionary forces but now one of the rarest of all Rudyard Kipling items.

I spent my working life as a scientist and so was very familiar with computers. When I retired, about 15 years ago, I thought it might be useful to other collectors if I made the fruits of 40 years of collecting more widely available.

Computers are essentially visual portals, ideally suited to the display of images, so I thought I’d have a crack at creating a website. It soon got noticed by some of the book magazines that used to exist – Rare Book Review, Book & Magazine Collector and by ABE, the online site for rare book sellers, who made me their ‘Book Collector of the Year’ in 2011.

How has the site grown?

When I started, every jacket was from my own collection but that is now only about 30% of the site. Over the years people started sending me images of books I didn’t have and I’ve also gleaned images from online listings.

I now list books by some 2000 authors with over 3000 images – a major resource for researchers, collectors and indeed the trade. 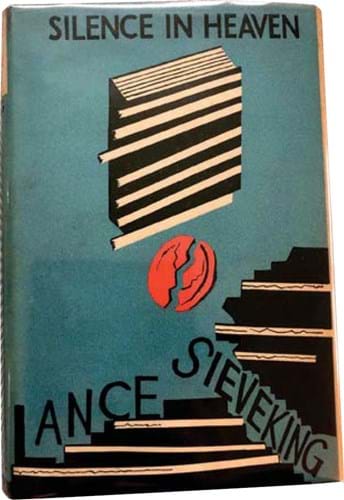 'Silence in Heaven' by Lance Sieveking with jacket by Paul Nash, 1936.

What kind of books do you show?

The site is largely confined to books published between the start of the war in 1914 until the beginning of the Second World War in 1939. It includes personal memoirs, fiction, poetry, official histories – anything with a war theme really.

Interest in the Great War declined throughout the 1930s and in fact little of any consequence was published again until the late 1960s.

As a collector there’s no challenge finding books from the last 50 years – the internet is full of them – plus the artistry that went into jacket design doesn’t seem to be there any more. Raised text and a sepia photograph seems to be enough now.

Looking back to my period there was real talent involved in the graphics, the typography and the central artistic image of the jackets.

Are you still finding new material?

Absolutely. It’s estimated that by the early 1920s over 20,000 separate publications had been produced covering some aspect of the war. Hardly a day passes without me seeing a book I’m unfamiliar with. I usually add four or five new images a week. My own collection has grown to some 2500 volumes.

Is it an expensive hobby?

Not necessarily. The big money in 20th century books is essentially the modern firsts market and then only the highlights – Graham Greene, Agatha Christie, Ernest Hemingway and so on. First World War literature rarely impinges on the consciousness of modest firsts collectors.

Occasionally the two worlds collide. Some of the war poets – Owen, Brooke, Sassoon – command high prices but on the whole you shouldn’t need to spend more than a few hundred for even the rarest books.

As an example, one of the finest war memoirs is John Lucy’s There’s a Devil in the Drum. Published by Faber in 1938 it’s very elusive – I’ve only ever seen a single copy in its jacket in over 50 years of collecting.

So it is in fact far, far scarcer than supposed rarities such as Casino Royale. But whereas the Fleming will set you back £30,000 or so the Lucy, should you be lucky enough to find one, will be about £300. 'Smite and Spare Not' by Lance Sieveking with jacket by Paul Nash, 1933.

Who are your favourite jacket artists?

Many of the best designs went unsigned but a number were and it’s worth looking out for jackets by Helen McKie and Fred Leist.

Among the more well-known artists was Paul Nash, who did some particularly fine ones for books by Richard Aldington and John Rodker. My favourite is probably a rather scarce abstract design he did for Lance Sieveking’s Smite & Spare Not.

In 1929, the art critic Anthony Bertram published his war memoirs, lightly disguised as a novel, called The Sword Falls. It had a jacket designed by the war artist Eric Ravilious.

Until recently there was no record of the jacket’s appearance until I induced a friend of mine to track one down in a university library. It’s now been published in a book about the artist. I have a signed copy of the novel but I’d dearly love to put a jacket on it!

What will happen to your collection in the fullness of time?

I’ve wondered about this. I would have said leave them to a university but that’s a risk now as some libraries are actually dumping books like these, either to auctions or in some cases literally, in skips.

Assuming I go first, my wife can flog them to someone like Turner Donovan, the military book specialist. That’s where a lot of them have come from in any case. So they can go back into the book trade, which is good.

Oddly enough, starting the website so long ago has turned out to be a disadvantage. It was once state-ofthe-art and still looks great but sadly the software used to build it is no longer supported.

So until my current system, or me, throws in the towel the site will stay the same. Basically, it’s not as ‘searchable’ as I’d like it to be. And it’s so big now that upgrading to new software would be too large a task.

Having said that, the site was one of the first to be archived by the British Library so hopefully its content will continue to exist in ‘the cloud’ for ever.

Book dealer Jeremy Carson can be found at antiquarianbookcompany.com