The latest evening sales of Impressionist & Modern and Contemporary art held at Sotheby’s (25/20/13.9 buyer’s premium + 1% overhead premium) in New York produced very high-selling rates but they were somewhat slimmer affairs than the normal run of sales in this category. While the ongoing issues of supply at the very top end of the market during the global pandemic appeared to be in evidence, more than 40% of the works on offer carried guarantees (either underwritten by the auction house or by third parties). Even so, the back-to-back live-streamed events did generate some exciting moments and set some individual records.

It had been announced at the start of the evening sale that two other Giacometti sculptures of tall static female figures had also sold separately. Femme de Venise IV was due to appear in the auction but had sold earlier via private treaty, while the larger 2.74m (9ft) high Grande Femme I was offered in an unusual sealed-bid private sale where the ‘minimum starting bid’ was set at $90m. Elsewhere, an auction record was set for Giorgio de Chirico when Il Pomeriggio di Arianna (Ariadne’s Afternoon) – an early work described by Sotheby’s as “one of his finest metaphysical paintings remaining in private hands” – took $13.6m (£10.8m) against an estimate of $10m-15m.

The Contemporary art sale posted a 95% selling rate with 39 of 41 lots sold. Two key works were withdrawn shortly before the sale: a Clyfford Still and Brice Marden that were consigned by the Baltimore Museum of Art and had a combined estimate of $22m-33m. They were pulled after donors opposing the sell-off threatened to withhold funds to the museum.

Curiously, the sale was led by a lot that wasn’t technically a piece of Contemporary art at all – a lot comprising three Alfa Romeo cars from the 1950s that took a below-estimate $13.25m (£10.3m). The catalogue had rather hopefully tried to link it to the art market, describing the lot as an “automotive triptych of unparalleled significance”. A piece of modern design brought one of the strongest competitions when a unique dining table from 1949-50 by Carlo Mollino consigned from the Brooklyn Museum drew a 10-minute bidding battle. Overshooting a $2m-3m estimate, it was knocked down at $5.15m (£3.99m), an auction record for the maker and for any work of Italian design.

It was part of a series of four Modern and Contemporary sales broadcast from London and Paris that raised a combined £107.8m with an average selling rate was 84% by lot. 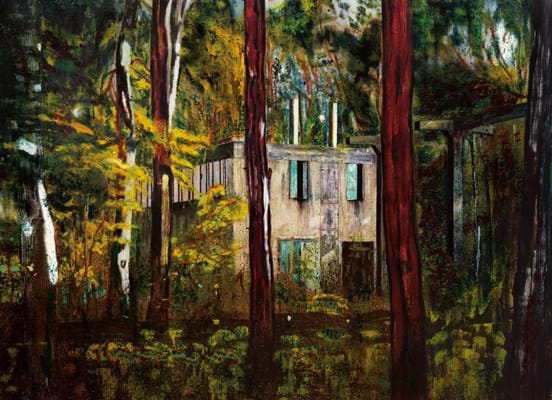 The auction was led by Boiler House, a 1993 painting by Peter Doig from his Concrete Cabin series that sold for £11.9m. Consigned by an American vendor, it had an unpublished estimate.

Also selling was David Hockney’s Portrait of Sir David Webster, the former general administrator of the Royal Opera House in Covent Garden which was being sold by the London institution itself. It sold on low estimate at £11m.