Almost 500 lots of British tokens spanning 300 years and covering all corners of the UK from the Collection of John Rose will be offered by Dix Noonan Webb of London November 17.

Rose, a familiar figure in the British token collecting fraternity for many years, first developed an interest in coins as a boy. One day in 1969, going through the trays of coins at Aladdins Cave, a shop in South Croydon, he found some tokens, including an example of the 1649 farthing issued at The Ship Inn, on the north corner of Lincoln’s Inn, London. It was his local pub when he first started work as a laboratory technician at the Royal College of Surgeons (that farthing is now estimated at £150-200 in this sale).

Shown top is a rare 18th century token depicting a man standing with wooden leg, stating Mr Joseph Askins – the celebrated ventriloquist 1796, which is estimated at £300-400. This 1836 letter from Caroline Hayley, a settler near Sydney, to one Mrs Dougan in Bloomsbury, London, describes life in Australia less than 50 years after the arrival of the ‘First Fleet’. On November 5-6 at Swan Fine Art in Tetsworth it is expected to bring £300-400.

The Fine & Rare Whisky auction at McTear’s in Glasgow on November 6 is not exclusively for blends and single malts. This bottle of J de Malliac 1934 Armagnac bottled in 1985 is pitched at £700-900. A sale of Staithes Group works at David Duggleby on November 6 includes Sunlight through the Trees in the Village Square by Mark Senior, estimate £700-900.

A sale of Staithes Group works at David Duggleby in Scarborough on November 6 includes this 10 x 14in (26 x 36cm) pastel Sunlight through the Trees in the Village Square, signed and dated 1905 by Mark Senior (1862-1927). This partially glazed terracotta plate conceived by Jean Cocteau in 1958 is estimated at £2000-3000 in the Peter Wilson auction on November 12.

This partially glazed terracotta plate conceived by Jean Cocteau in 1958 is signed Edition originale de Jean Cocteau/Atelier Madeline-Jolly and numbered 5/40. It comes together with a certificate of authenticity for sale at Peter Wilson in Nantwich on November 12. Gold and enamel scent bottle in fitted shagreen case, c.1770, has London hallmarks for the maker IH or JH, estimate £400-600 at Tennants on November 14.

Although of a type sometimes catalogued as French, this gold and enamel scent bottle in fitted shagreen case, c.1770, has London hallmarks for the maker IH or JH.

It perhaps refers to John Harvey of 54 Snow Hill who entered his mark as a gold-worker on October 22, 1773 – the third smallworker of that name to have entered at mark with the Worshipful Company of Goldsmiths. The two others were his father (registered in 1759) and grandfather (1738).

The bottle has a guide of £400-600 as part of Tennants’ sale of Fine Jewellery, Watches & Silver in Leyburn on November 14. This Edwardian diamond-set lozenge-shaped pendant brooch, set with nine square old cut stones has a guide of £1600-2000 at Pippa Deeley in Bodiam, East Sussex on November 7.

It is named as the property of the late Lady Katherine Davson who received it as a gift from her grandmother on her 21st birthday. 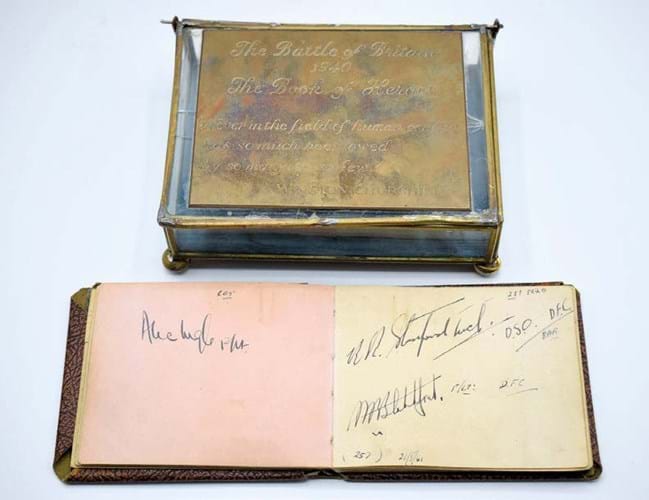 This Battle of Britain autograph book titled The Book of Heroes comes for sale in Stroud Auctions in Gloucestershire on the second day of an arms and militaria sale on November 4-5.

Collected in 1941 by Norman Phillips, a mess steward at RAF Martlesham Heath in Suffolk, the signatures include more than 100 pilots – more than 20 of them recipients of book the Distinguished Flying Cross (six of these being awarded a bar and one a double bar).

By repute the rexine covering to the book was cut from a chair by Douglas Bader himself. It is also said that Churchill said to Bader the book was “not a book of names, but a book of heroes. God forbid it should ever be lost.”

The vendor purchased the book at auction in 2011.

Two Victoria Cross medals awarded for the Indian Mutiny of 1857-58 are for sale at Morton & Eden in London on November 18.

The first was awarded to Captain George Forrest for ‘gallant conduct in the defence of the Delhi Magazine’ on May 11, 1857, placing it among the earliest VCs to be awarded in the Indian Mutiny. It is estimated at £80,000-100,000 and has not been seen in public since it last appeared at auction in 1997.

The second example (pictured here) is the ‘Kashmir Gate’ VC awarded to Ensign John Smith of Royal Bengal Engineers, who was a sergeant in the Bengal Sappers and Miners at the time of the Mutiny. In broad daylight and under heavy musket fire he demonstrated ‘conspicuous gallantry’ during the storming and destruction of the Kashmir Gate at Delhi on September 14, 1857. Estimated at £70,000-90,000, it last appeared at auction in 1989.

Walking stick presented to Friedrich Wilhelm Viktor Albrecht Von Preuben, later Kaiser Wilhelm II, on the occasion of his marriage in 1881 – estimate £18,000-22,000 at Charterhouse on November 5-6.

Presented to Friedrich Wilhelm Viktor Albrecht Von Preuben, later Kaiser Wilhelm II, on the occasion of his marriage in 1881, the stick has probably never been used for walking, however.

It comes to the sale in Sherborne, Dorset, from a collection of walking sticks in Devon. The Pedestal’s auction Design For Living will be held on November 10 at The Dairy, Stonor Park.

Assembled to appeal to the professional interior decorator as well as those looking to furnish their own private home with interesting and original pieces, it includes this rare table lamp designed by Gino Sarfatti (1912-84) for Arteluce, c.1951. It features three polychrome lacquered shades on a marble base. Young’s auction in Farnham, Surrey, on November 7 includes items from the estate of the Austrian emigré art dealer Paul Wengraf (1894-1978).

Wengraf left Austria with his family in 1938 to avoid Nazi oppression of the Jews, leaving behind the Alexander-Wengraf Gallery in Vienna. Because he left in an organised manner he was able to take artwork and other possessions with him; these included works by Egon Schiele, Anton Faistauer, Johannes Fischer as well other artists including Friedl Dicker-Brandeis who had been personal friends.

Once settled in London he was in contact with other emigré and refugee artists such as Joseph Herman. Wengraf established the Arcade Arts gallery off Bond Street and during the war held exhibitions for up-and-coming artists such as Ishbel McWhirter. The Marine Sale at Bonhams on November 11 includes this scrimshawed sperm whale’s tooth from the English 19th century whaler Henrietta.

Engraved on both faces with whaling scenes, it is lettered Jake Tokens WS Henrietta and measures 7½in (19cm) long on its original rope suspension loop. Leading the Phillips Design sale in London on November 12 is a selection of Italian Mid-century pieces.

Among a series of works by Gio Ponti (1891-1979) is a prototype Mariposa sofa, exhibited at the XI Milan Triennale in 1957. It is one of only two examples known to exist; the second example remains part of the furnishings for Villa Planchart, Caracas (1955), one of Ponti’s celebrated architectural projects.

According to Phillips, the Mariposa “marks a turning point in furniture design as Ponti abandoned wooden legs and traditional materials, instead using thin tubular metal legs that separated the floor from the volume of the seat”. This Dunhill Aquarium table lighter c.1950 with reverse painted panels of zebra fish has a guide of £600-900 at Thomas R Callan in Ayr on November 7. This Art Deco platinum and 18ct gold sapphire and diamond bracelet by La Cloche Frères has a guide of £6000-8000 at Fellows’ Fine Jewellery sale in Birmingham on November 12.