One last visit to the Colony Room in new exhibition Daniel Farson’s photograph of Francis Bacon (c.1950) is ticketed at £1450 at the Dellasposa Gallery.

Long an epicentre for artists, drunkenness and chaos, Soho’s Colony Room Club is now the focus of an exhibition at London’s Dellasposa Gallery.

Half of the show features the work of the artists who frequented the club, from the mid-century crowd that included founding member Francis Bacon (1909-92), Lucian Freud (1922-2011) and Frank Auerbach (b.1931), to the YBAs (Young British Artists) who populated it in the mid-1990s. The other half focuses on photographs of the members and the wider circle of ‘Sohoites’.

Founded in 1948 at 41 Dean Street, the club was run by Muriel Belcher. George Melly called her “a benevolent witch.”

A magnet for career drinkers as well as the artistic elite – plus visiting celebrities such as Princess Margaret and David Bowie – the club was described by journalist Molly Parkin, as “a character-building glorious hellhole. Everyone left their careers at the roadside before clambering the stairs and plunging into questionable behaviour.” 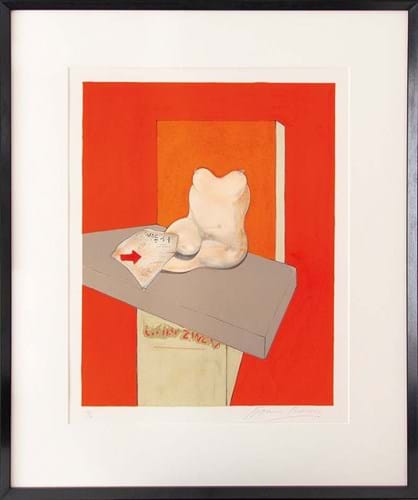 Ownership passed to two successive barmen, ending with Michael Wojas. Under his management, which started in 1994, the YBAs flocked to the club – including Sarah Lucas, who worked behind the bar and has now produced a new work for the show.

In 2008, doors closed. Wojas auctioned off major pieces of the art collection at Lyon & Turnbull, including a mural by painter Michael Andrews (reportedly offered to settle an unpaid bill), causing an outcry from members who campaigned to keep the club open.

The Dellasposa exhibition, which runs until December 20, follows the publication of Tales from the Colony Room: Soho’s Lost Bohemia by Darren Coffield, who also curated the show.

“This is a disparate collection of artists united by one thing: conviviality,” Coffield says. “The club was a safe haven for creatives and people who lived outside of convention, and its closure in 2008 was without question the end of bohemian London. This show is a celebration of those times.” Organised over two floors of the Lancaster Gate gallery, the exhibition includes pieces on loan from public and private collections as well as various works available to buy.

Among the highlights with a price tag are a lithograph of Study of a Human Body after Ingres (1984) by Bacon, offered for £13,200, and an etching by Freud of Eli offered for £165,000. Also on display are works by Eduardo Paolozzi, Peter Blake, Patrick Caulfield, Gavin Turk and Tracey Emin.

Gallery director Jessica Phillimore describes the Colony Room as “very important in the history of British art – a place where artists could socialise and exchange ideas. There is nothing like it in London anymore, and probably never will be again, and the work in this show is a testament to the spirit it enkindled in those that went there”.