A wealth of Indian and Islamic art and artefacts are available to view and buy in late October from both participants at Asian Art in London and auction houses whose sales are timed to coincide with the festival. 1. Putting Mecca on the globe

This 8in (20cm) brass celestial globe probably from Safavid Persia is signed for the engraver ‘Iskandrani’ and dated 1128AH (1716).

Globes of this nature were popularised in the Timurid period by patrons who extended their support for the arts into the sciences. Portraying stars and constellations as if viewed from above, they could be used as astronomical instruments to guide the viewer and serve as a map of the heavens. They also had a religious purpose as they could be used to tell prayer times and establish the location of Mecca.

Included in the October 30 sale at Bloomsbury Auctions titled Works on Paper from the Islamic and Near Eastern Worlds, it has a guide of £4000-6000. Seven loose folios from a late 16th century Safavid manuscript made in Qazvin or Isfahan – estimate £4000-6000 at Chiswick Auctions on October 29.

These seven loose folios, each approximately 12 x 8in (30 x 20cm), are from a late 16th century Safavid manuscript made in Qazvin or Isfahan. They depict a variety of scenes from Abu Al-Qasim Ferdowsi’s Shahnama.

Last sold at Sotheby’s Paris in 2017 as part of the collection of Jacques Bacri, they have an estimate of £4000-6000 at Chiswick Auctions on October 29. They form part of an 80-lot consignment from a London gentleman.

This gold 10 mithqals coin issued by the man who introduced Islam to northern India has a guide of £200,000-300,000 at the Islamic coin sale held by Morton & Eden in London on October 22.

Mu’izz al-Din Muhammad was from Ghor in the heart of present-day Afghanistan. Together with his elder brother, Ghiyath al-Din, they created a vast Ghurid empire in the late 12th century stretching from northern India in the east to the margins of the Caspian Sea in the west.

Similar large presentation coins or medallions minted at Ghazna for the years of 597AH and 598AH (1200-01) carry the names of both brothers but this example (from a European private collection where it has been for decades) is the only known example to bear the sole name of Mu’izz al-Din.

Exactly why such a prestigious issue was struck is not known for certain, although it carries the date 601AH (1205), the year when the whole of Hindustan came under Mu’izz al-Din’s sway. As swathes of Indian territories fell under his command, ‘Muhammad of Ghor’ replaced existing temples with mosques and introduced Islamic precepts and legal principles. 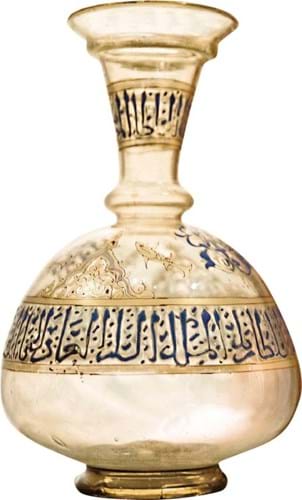 Sotheby’s holds its Arts of the Islamic World & India auction in Bond Street on October 27.

Among the projected highlights is this Mamluk glass flask dated to the mid 13th century. It was previously in a private collection in France and – after analysis of both glass and decoration – represents an addition to the corpus of gilded and enamelled Syrian glass from this period. As well as decoration of swimming fish, it features an inscription praising an unnamed sultan.

5. From the Lion of the Punjab’s widow The gem-set gold forehead pendant (chand-tikka), gem-set gold mirrored roundel and a pearl-mounted gold pendant are estimated together at £60,000-80,000.

The only surviving widow of the Lion of the Punjab, Jindan Kaur led spirited resistance to the encroachment of the British into the Punjab but was eventually forced to surrender in 1846. More than 600 pieces of her jewellery from the legendary treasury of Lahore were confiscated.

Bonhams’ trio was almost certainly within the casket of jewels handed back to Maharani Jindan Kaur by the British authorities when she agreed to live in London with her son, Maharaja Duleep Singh.

The last surviving member of the family that had ruled the Sikh Empire in the Punjab, she settled permanently in Lahore towards the end of her life, presenting these three pieces to her companion and friend Dora Crowe.

6. A star of Gombroon ware Although resembling porcelain, Safavid Gombroon ware (created in the late 17th and early 18th century Gombroon – now Bandar Abbas) was made from crushed quartz, white clay, and frit, which when fired became glassy.

This bowl painted with black stars and underglaze blue prongs with a pierced abstract design to the cavetto comes for sale at Woolley & Wallis on November 11. From a private collection in West Yorkshire and previously purchased from E&H Manners in 1992, it has an estimate of £1000-2000. The piece belongs to a small group which have generally been attributed to Nasrid al-Andalus (1230-1492). The kaleidoscopic technique of micromosaic known as taracea requires each tiny element being individually applied.

A pyxis in the Alhambra Museum is thought to have been produced in the same workshop somewhere on mainland Spain. It is dated to the 15th century, although recently (based partly on carbon dating tests) the group has been reattributed to the 12th or 13th centuries.

The use of these pyxis is unknown, although they may have been used as inkwells or for aromatics. The European and Asian Works of Art sale at Olympia Auctions on November 18 includes, courtesy of specialist Arthur Millner, a fine collection of Islamic tiles. They were acquired by a European collector from auctions and antiques dealers in London and Paris between 1997-2008 and artfully displayed around a fireplace in a central London home.

Most are from Damascus and together form a comprehensive archive of the range of designs produced in Ottoman Syria from the mid-16th to early 18th centuries.

As detailed in Millner’s 2015 book, Damascus Tiles, these Ottoman period wares took their cue from the ceramics produced in the imperial workshops in Iznik, western Anatolia, but are characterised by a different colour palette, with fresh greens and blues, and a more free-flowing style. The sale of Japanese, Islamic and Asian Art at Mallams Cheltenham on November 5 includes these Gandharan 2nd or 3rd century schist reliefs depicting Shiva and Parvati. The larger of the two pieces, offered as a single lot with an estimate of £300-500, is 11in (28cm) high.

They come for sale by descent from the collection of the German-born, London-based Old Master drawings dealer Hans Calmann (1899-1982). The third and final part of a collection of coins of the Indian sultanates will be offered in 284 lots by Dix Noonan Webb on October 14.

This silver tanka is from 799AH (1376) and the reign of the Bahmanid sultan Ghiyath al-din Tahmatan. Also known in history as the Deccan sultanate, the Bahmani sultanate was the first independent Islamic kingdom in south India, with its capital in Ahsanabad (Gulbarga). Pictured here are two of five drawings sketched by the Indian Modernist MF Husain (1915-2011) in a London back garden in November 1976.

Each measuring 42 x 59cm, they were originally within a sketchbook and were given by the artist to the vendor.