The highlight of a two-day sale of works from White Oaks, a prominent Atlanta mansion, was this portrait of Anglo-Irish society hostess Oonagh Guinness by Philip de László (1869-1937). 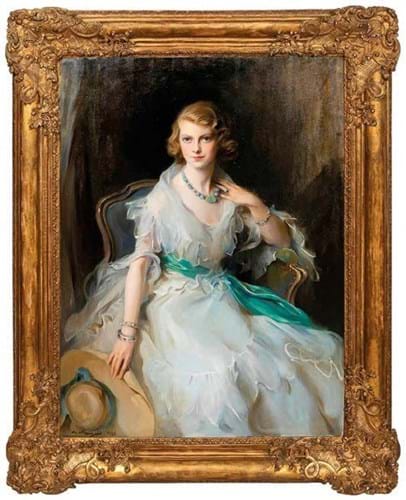 Oonagh was one of the three ‘Golden Guinness Girls’, the daughters of Arthur Ernest Guinness (1876-1949) who, as head of the family’s eponymous brewing business, rose to become the wealthiest man in Ireland.

De László himself, a ‘society artist’ known for his portraits of royal and aristocratic figures, had married into a branch of the Guinness family, wedding Lucy Madeleine Guinness in 1900.

The 4ft 4in x 3ft 3in (1.3m x 99cm) oil on canvas was signed and dated 1931. It shows the sitter seated and wearing a white chiffon dress with green sash and holding a wide brimmed hat. Its official title was The Honourable Mrs. Philip Leyland Kindersley, née Oonagh Guinness, later Lady Oranmore and Browne.

The picture had hung in the drawing room at Luggala, the 18th-century hunting lodge in Co Wicklow, Ireland, that Oonagh had been given by her father and where she lived until her death in 1995.

After later being sold as part of her estate, its subsequent whereabouts had been a topic of conjecture for a number of years.

It re-emerged at Atlanta auction house Ahlers & Ogletree (18% buyer's premium) as part of its White Oaks sale on September 12-13 with labels to the reverse for the Galeries Charpentier and the Christopher Wood Gallery.

The items were consigned by the children of the mansion's previous owners and it was thought possible that the portrait may have been acquired from the Christopher Wood Gallery in the 1990s on one of many buying trips to the UK during that time. It was estimated at $30,000-50,000.

After strenuous competition with 14 active phone and absentee bidders as well as significant online interest, it eventually came down to a two-way phone battle. The portrait was finally knocked down at $275,000 (£214,800) – the second highest price at auction for de László and only behind the £220,000 that was fetched by his portrait of Mrs Adrian van Montagu that sold at Christie’s in December.

Overall, the sale of items from White Oaks raised $1.58m (£1.23m) including premium with all 769 lots selling. The collection included antiques, books, Chinese works of art and decorative arts such as works by Tiffany, Lalique and Asprey.

Marquess heads back to ancestral home from US