A selection of sixteen upcoming lots from auctions taking place around the UK and Ireland. A first edition of ‘A System of Magick or a History of The Black Art’ by Daniel Defoe – estimated at £400-600 at Lyon & Turnbull.

A 1727 work by Daniel Defoe is one of around 90 lots from the Trevor Dawson collection of magic books which are included in Lyon & Turnbull’s September 30 auction of Rare Books, Manuscripts, Maps & Photographs.

A first edition, A System of Magick or a History of The Black Art is estimated at £400-600

Dawson was by profession a commercial chartered surveyor. However, his hobby since a teenager had been magic, and for over 40 years he was a member of the Magic Circle and The International Brotherhood of Magicians. In his early years he was a semi-professional magician and later performed close-up and cabaret magic.

His interest extended to his own writings on the theme: he published original tricks in most of the leading magazines and was a historian, lecturing in the UK and the US. Venice, an oil on canvas by Frank Brangwyn (1867-1956), is estimated at £4000-6000 in the Fine Books, Manuscripts and Works on Paper sale at Forum Auctions in London on September 25. Signed with initials, the 16in x 2ft (40 x 61cm) framed work from c.1908 has a provenance to Ian MacNicol, Glasgow; The Fine Art Society, Glasgow and Connaught Brown, London. The September 26 auction at Lynes & Lynes in Co Cork includes this portrait from a local house contents.

The English school picture dates from the early 19th century and has a note on the reverse that reveals the sitter to be Hannah Stephens, wife of Henry Stephens. According to the document she died young in 1832. Bonhams next Antique Arms and Armour sale in Knightsbridge, London on September 23 will feature an important group of mainly 18th and 19th century British firearms by most of the leading manufacturers of their day.

Among these is a pair of mid-18th century Scottish 20-bore flintlock all-metal belt pistols believed to have been made for the 2nd Duke of Northumberland (1742-1817), who, as Lt-Gen Hugh Percy, fought with distinction in the American Revolutionary War (1775-83). Sir William Orpen’s (1878-1931) The Beggar Girl was executed after the artist visited Madrid’s Prado with Hugh Lane on a buying mission for his Modern Art Gallery for Dublin. Seeing Goya, Velázquez and the Dutch Masters ‘in the flesh’ impressed on him heavily.

The 2ft 6in x 22in (76 x 56cm) oil on canvas, signed upper left, is offered in Whyte’s Irish & International Art sale to be held at the Royal Dublin Society Exhibition Centre on September 28. It was shown in the Sir William Orpen, exhibition at Beaux Arts Gallery, London, in July 1924. This 13in (33cm) blue and white transfer-printed Spode Caramanian series drainer, c.1810, is printed with the design titled Antique Fragments at Limisso. It has a guide of £180-250 at Hansons’ September 30 sale of a single-owner collection of Spode. The so-called ‘Breeches Bible’, the first of which appeared in 1579, takes its name from a textual anomaly in Genesis chapter 3, Verse 7. It reads: “Then the eies of them both were opened, and they knew that they were naked, and they sewed figge tree leaves together, and made themselves breeches.”

In the King James version of 1611, ‘breeches’ was changed to ‘aprons’. This 1602 copy printed by Robert Barker is prefaced by Morning Prayer and The Psalmes and concluded by two Concordances and musical psalms printed by John Windet.

michaeljbowman.co.uk or see this item on thesaleroom.com Italian oil on canvas depicting the entrance to the Grand Canal in Venice – estimated at around £1000 at Plymouth Auction Rooms.

Discovered in a property on the banks of the River Tamar, this Italian oil on canvas depicting the entrance to the Grand Canal in Venice has a guide of around £1000 at Plymouth Auction Rooms on September 30.

plymouthauctions.co.uk or see this item on thesaleroom.com Kingham & Orme in Evesham is offering a single-owner collection on September 26 comprising over 300 pieces of Moorcroft and 50 pieces of Martin Brothers. The sale at Piano Auctions in Langley, Berkshire, on September 29 includes this No 5 steel bar-less drawing room grand piano by Broadwood, c.1905.

The panelled oak case was designed by Edwin Lutyens for his fellow London club member, Robert Henry Benson, for his music room at Buckhurst Park.

The piece is illustrated there in a photograph which appeared in Country Life magazine in 1912.

pianoauctions.co.uk or see this item on thesaleroom.com 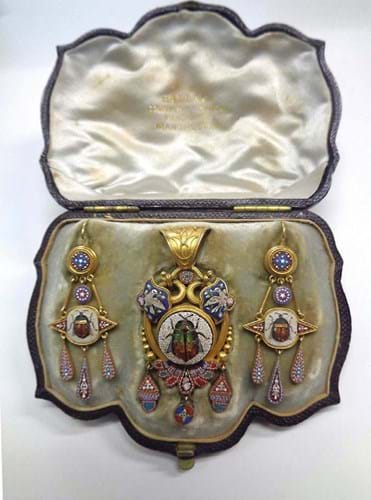 The pendant bears the crossed keys hallmark for the Papal States, while the earrings are hallmarked with an eagle’s head and capital letter R.

Housed in a fitted leather case by Hall & Co, Goldsmith and Diamond Merchants of Manchester, it is estimated at £1500-2500 in the September 24-25 sale in Ashburton, Devon.

rendells.co.uk or see this item on thesaleroom.com Lord’s Calculator slide rule made by Elliot Bros – estimated at £2000-3000 at David Stanley.

The Lord’s Calculator slide rule was created specifically for the textile industry. Two patents exist for the Lord’s, the first filed in 1892 by mill manager Lawrence Lord and a second in 1904 by Lord’s sons that laid out the design for the pocket-watch style model.

This example made by Elliot Bros with a 10in (25cm) dial comes for sale in excellent condition at antique tool specialist David Stanley in Leicestershire on September 24. This Marcel Bonnot car mascot mounted on its original radiator cap commemorates the first motorised crossing of the Sahara, by the half-track or ‘autochenilles’ Citroen Kegresse.

In December 1922 a team followed a medieval route across the sands, driving for 21 days from Quargla to Tam then south-west to Bourem on the Niger river via Tin Zaouatine and Essouk near ancient Tadmekka in the Adrar des Ifoghas.

bespokeauctions.co.uk or see this item on thesaleroom.com A pair of late Victorian gold mounted banded agate and onyx earrings – estimated at £150-200 at Fellows. The online-only general sale at Dreweatts in Newbury closing on September 24 includes this rare early 19th century sulphide cameo medallion attributed to Apsley Pellatt. The subject is Kamehameha II, the second king of Hawaii who visited England with his wife in 1824. Sadly, after the royal entourage succumbed to measles, he died in London on July 14. Vast crowds lined up when he was laid in state at the Caledonian Hotel.

An almost identical sulphide by Pellatt is held by the Honolulu Museum of Art. Estimate £400-800. Equestrian paintings by leading British sporting artists come to the market for the first time in a century at Cheffins on October 1. The 20 works make up the core of a private collection begun in 1849 by John Dunn Gardner (1811 1903) of Denston Hall, Suffolk and later added to by his son Algernon Dunn Gardner (1853-1929).