Although the elegant lines of the Cartier Tonneau Curvex wristwatch are the antithesis of today’s macho tool watch, many were used by soldiers in the First World War.

The Cartier Tonneau Curvex wristwatch, with movement still functioning, sold by Fellows on February 15 for £12,000 had a presentation inscription to Captain AD Thomson dated May 1, 1915.

Bought from Cartier’s London store in October 1914, it was given as a gift (perhaps by the military) shortly before Thomson left for the Western Front. A captain, he served in the Argyll and Sutherland Highlanders who were rushed to France in May 1915.

Showing only a few signs of trench life, it had been worn just twice since it was purchased by the vendor from the Thomson family in 1994– a £1000 deal that included Great War and earlier campaign medals awarded to Thomson and his father. 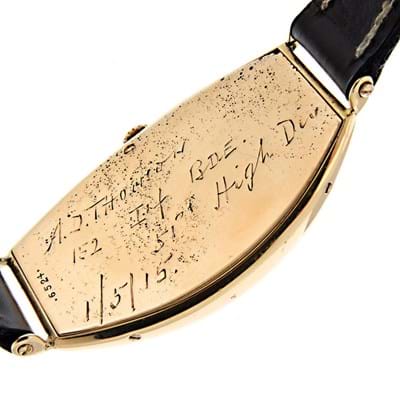 The Tonneau, named for its distinctive barrel shape, was the second wristwatch model created by Louis Cartier. Following on from the Santos (the first made for Brazilian aviator Alberto Santos-Dumont in 1904), the Tonneau launched in 1906.

Typically, these early Cartier watches have movements marked for the European Watch & Clock Company – a partnership that united Cartier with Edmond Jaeger and the Swiss firm of LeCoultre.

Roman mosaic to remain in Dorset after fundraising success