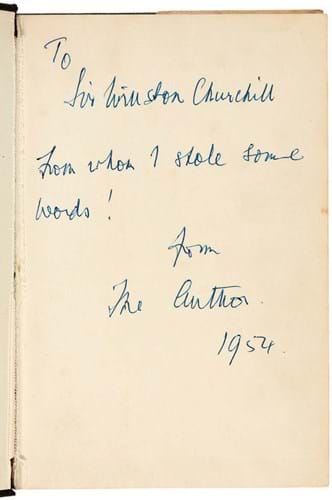 Ian Fleming’s presentation inscription in the 1954, first impression copy of 'Live and Let Die' that he gave to Winston Churchill – £150,000 at Sotheby’s.

Promoted as the most significant collection of Fleming’s books ever seen on the market, it included inscribed first edition copies of every James Bond book, and a great many others besides – proof copies, variant issues, etc.

Churchill as a friend

The most expensive of the inscribed firsts, at £150,000, was a 1954, first impression copy of Live and Let Die that Fleming inscribed “To Sir Winston Churchill, from whom I stole some words!”.

Fleming had admired Churchill since he was a boy.

His own father, Valentine, had served alongside Churchill during the First World War, and when he was killed it was Churchill who wrote his obituary for The Times.

In April 1954, in a letter to Churchill, Fleming had written “Since I have had the presumption to steal from Thoughts and Adventures, your dramatic tribute to the Secret Service… I am now also presuming to send you a copy… [of Live and Let Die].

“It is an unashamed thriller and its only merit is that it makes no demands on the mind of the reader. I hope you will accept it and forgive my theft of a hundred words of your wonderful prose…”

This copy was first seen at auction in 1989, when as part of a Sotheby’s sale of books from Churchill’s library it made £5800. In 2002 it re-appeared at Christie’s New York, where as part of the magnificent library of Roger Rechler it made $60,000.

A copy of Goldfinger of 1959 that Fleming inscribed for Raymond Chandler took £40,000, though the copy of Moonraker he gave him remained unsold.

The jacket shows a few tears, but this is the copy of The Spy Who Loved Me that Fleming gave to Robert Kennedy – £45,000 at Sotheby’s.

A copy of The Spy Who Loved Me of 1962 that Fleming gave to Robert Kennedy realised £45,000. Fleming also sent copies of the book to his brother, John F Kennedy, as well as to their sister, Eunice Shriver.

Sold at £55,000 was the copy of Casino Royale that Fleming gave to Leonard Russell, his editor at the Sunday Times, and the man who commissioned him to write the travelogue published in 1963 as Thrilling Cities.

From hubby with love Battered and uncorrected proof copy of From Russia with Love – £26,000 at Sotheby’s.

A 1957 first of From Russia with Love that he inscribed for his wife, Annie, realised £38,000, but one of the more surprising results was produced by an uncorrected proof copy of that book.

It was in poor condition, as the accompanying photograph shows, but only 75 such copies were printed and Jon Gilbert, Fleming’s bibliographer, reckons that only a tiny number appear to have survived. This one sold at £26,000, and other proof copies also sold well. An uncorrected proof copy of Dr No realised £18,000.