2500 issues of ATG: VAT, Scotland Yard and a narrow escape The first edition of ATG led with news of VAT being applied to antiques.

Antiques Trade Gazette has now reached issue 2500 – a landmark, certainly – but it is not quite our 50th anniversary.

This week on these pages we are sharing some of the earlier issues of ATG from the first to the 2000th. Headlines concerning taxation, crime, new fairs, auction records, exhibitions and changes in the prices of precious metals are familiar to readers whenever they began their subscription. Those who joined us only more recently will have been ‘treated’ to more than their fair share of stories about Brexit, antique ivory bans and coronavirus.

We are always delighted to hear from our readers and those who have been subscribing for a long time often get in touch to share their feedback of the early years. Andrew Jenkins of Avon Antiques wrote to us in May, for example, noting that 2021 is our anniversary year: “I have taken the ATG from the first edition. Prior to this, I had ordered and read numerous West Country newspapers’ weekend editions for sale announcements.

“The arrival of the ATG meant sales in this area were open to all readers. This was a blow at first, but knowing what was happening throughout the UK and Ireland widened the ability to search everywhere, gradually having a better choice and good results.”

“The application of Value Added Tax to dealing in antiques could kill London as the world’s art centre and put hundreds of dealers out of business.” So began the first article on the front page on issue number one in 1971.

The debate over the introduction of VAT featured regularly in ATG in the early years. Also appearing on page one was the “world’s first major exhibition of Doulton art pottery” staged by Richard Dennis at 139 Kensington Church Street. Fast forward to April this year and Kinghams held an auction titled Richard Dennis: 50 Years Promoting British Ceramics (1971-2021). The pages inside included a story about Moon Antiques of Winchcombe taking at a stand at the Cheltenham Antiques Fair (an event still going strong in 2021) and a preview of an auction at Bearnes & Waycotts of Torquay. The firm later relocated to Exeter in 1997 and became Bearnes Hampton & Littlewood in 2009 following a merger. “The police will be looking into the matter of wrong pictures very carefully” as the incident known as the Palmer affair was referred to Scotland Yard in 1976. Elsewhere, a new fair for British dealers to exhibit in Amsterdam was announced by Patricia Harvey. 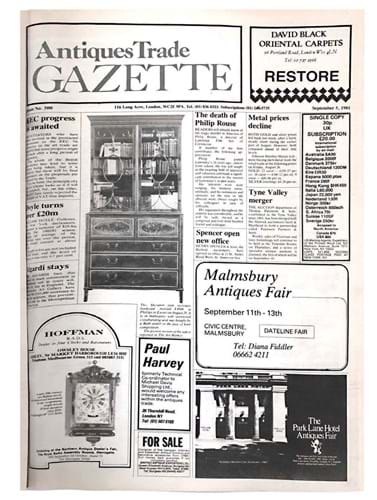 This edition posed the question: 'How many fair visitors really come to buy?' According to a survey conducted by Philbeach Events, organiser of the Fine Art & Antiques Fair at Olympia, 75% came with the intention of buying. A similar survey by Grosvenor House found it was 50%. ATG suggested a better question would be: "Did you buy?” A serious fire at Stephen Morris Shipping broke out in its Kings Cross premises in London. "We only just had enough time to get everyone out," the firm’s owner told ATG. The blaze was tackled by 15 fire engines but the building was razed to the ground. Ivor Turnbull, the founder and first editor of ATG, was celebrated on the front page as was the first issue. "Trends have come and gone (but] some things never change: the thrill of a great deal; the appreciation of artistry, craftsmanship and beautiful things; the ingenuity of trade professionals."

In our golden jubilee issue in September we will be documenting the full 50 years of the trade that our newspaper has covered. We will also be sharing more readers’ recollections of art, antiques and ATG in the early 1970s and 1980s and we encourage you get in touch.

Email us your memories of that time to editorial@antiquestradegazette.com, or send us a letter to arrive no later than July 31 to:

We are also interested in hearing from readers who can share their memories from the early 1970s of these businesses that appeared in ATG issue number one:

Preparing for the day ahead Tony Haynes says: ‘This image was taken in 1983, showing my late father [also called Tony] in his home office scanning the ATG before he set off on the road for the day viewing sales. He would have been 37 years of age.

“The trade had many great dealers who all relied on their copy of the ATG to fulfil their weekly diaries and auction house printed catalogue requests. This was all before the event of mobile phones and wider use of computers, so these calls all needed to be made before leaving the house.

“There are, of course, many stories to share from my late father’s art dealing years, those of many great finds and occasional mistakes. By sharing these now with our children, the third generation of Haynes family art dealers, we carry forward a wealth of knowledge. This, of course, Is accompanied by their printed and digital copies of the ATG, 50 years on.”

The resilient world of art and antiques auctions: UK Auctions 2020 – a report by thesaleroom.com

Introduction: How ATG continues to support the fine art and antiques industry after half a century