Charlie Wilson (1895-1971) began his career at local Warwickshire club Atherstone Town and then Coventry City before joining Spurs after the First World War. He was then signed by Herbert Chapman for his all-conquering Huddersfield Town FC in November 1922 and finished top goal scorer in each of his first three seasons at the club.

His goals gave Huddersfield successive league championships in 1924 and 1925, although he missed out on the club’s historic three-in-a-row championship title in 1925-26, picking up an injury early in the campaign. The forward was sold to Stoke City where he continued to be a prolific goal-scorer.

grahambuddauctions.co.uk or see this item at thesaleroom.com The clocks, from a client near Salisbury, have been amassed over many years. There are 35 bracket and wall clocks in all shapes and sizes dating from the 18th to the early 20th centuries.

Shown here is a late 18th century bracket clock by James Cuthbert. In an unusual brass case it has a phase of the moon to the arch, is fitted with a repeat, and is estimated at £3000-5000. 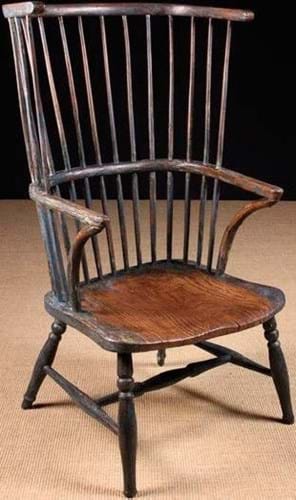 This 19th century comb-back windsor armchair with residual paintwork was probably made in the Leicestershire area.

It comes for sale at Wilkinson’s Period Oak, Country Furniture & Effects sale in Doncaster on November 27-28 with an estimate of £800-1600. This grotesque frog jug made at the CH Brannam pottery, c.1900, has a guide of £150-250 at Tyne Valley Auctions in Corbridge on November 27.

tynevalleyauctions.com or see this item at thesaleroom.com Roderic O’Conor (1860-1940) was born in Ireland, educated in England, but settled in Paris and was part of the Pont-Aven school of painters.

This 1892 work on offer at Parker Fine Art on December 2, Sea and Red Rocks, painted in typical strong colours, dates from the critical phase of his career and is a forerunner to his series of seascapes painted at end of the 1890s in Brittany. The Pont-Aven school artists were based in Le Pouldu, which O’Conor visited for the first time the same year as this painting.

The 9½ x 11in (24 x 28cm) oil on panel was discovered in a local Farnham house and has a provenance to Roland, Browse, and Delbanco, London. This icon of the Dormition of the Mother of God, painted c.1900 in 16th century Moscow School style, comes for sale at Sworders on December 1 as part of a collection of Russian art from the residual stock of London gallery Iconastas.

It is one of two icons previously owned by George Hann (1890-1979), a pioneer of American aviation who assembled one of the world’s finest private collections of icons at a time when many pieces were being sold by the Russian government.

This icon, estimated at £10,000-15,000, can be traced to a sale by the Antikvariat, the department of the Ministry of Trade set up by Lenin to handle the sale and export of art from Russian museums, made directly to Hann in 1936. It has labels for the famous collector Alexei Vikulevitch Morozov, who had bequeathed it to the State Tretyakov Gallery in Moscow.

Hann’s collection, exhibited on multiple occasions, was sold in a landmark auction at Christie’s in 1980, with this piece subsequently acquired by the late Chris Martin-Zakheim (1947-2018), co-owner of the former gallery in Piccadilly Arcade, St James’s, London. The firm, founded with John Gaze in 1974, specialised in Russian works of art until Martin-Zakheim’s untimely death with a brain tumour in 2018.

The sale of 100 lots, the first of several tranches of material from Iconastas, will be on view at Sworders’ London gallery from November 25-30 as part of Russian Art Week, with the auction held in Stansted Mountfitchet, Essex, on December 1. Egyptian turquoise-glazed faience hippopotamus dating from the Late Middle Kingdom or the Second Intermediate Period, 1803-1550BC – estimate £40,000-60,000 at TimeLine in London.

This 5in (12.5cm) Egyptian turquoise-glazed faience hippopotamus dates from the Late Middle Kingdom or the Second Intermediate Period, 1803-1550BC. The motifs worked in black represent hunting nets and Nile river plants. It comes for sale in a sale of Ancient Egyptian and Greek works of art at TimeLine in London on November 30.

The property of a London gentleman, it has a provenance dating back to the collection of the Adda family, originally from Alexandria, formed in the 1920s-30s.

Hippopotamus figurines are found in burials across Egypt in this period, associated with Taweret, a goddess connected with fecundity and birth.

timelineauctions.com or see this item at thesaleroom.com JRR Tolkien lots estimated at £5000-10,000 are part of the Pamela Chandler studio collection for sale at Reeman Dansie.

Reeman Dansie will offer an archive of photographs, ephemera and related artefacts from the studio of mid-20th century high-society photographer Pamela Chandler (1928-93).

Her position as a leading London-based photographer of this era led to commissions from royalty, stars of stage and screen and literary figures, including being the photographer of choice for the publicity-shy JRR Tolkien (shown right).

Chandler is celebrated for her official photographs of Harold MacMillan taken at Downing Street in 1960, when she was only 31. She also notably took unofficial portraits of Queen Elizabeth II at Buckingham Palace in 1957 for use by the sculptor Ben Enwonwu.

Many of the images are to be offered together with copyright passing to the successful bidders. Tolkien lots include a unique group of colour and black and white negatives and colour transparencies original to Chandler’s 1961 and 1966 photographic sessions with him, and other related items, estimated at £5000-10,000.

The archive will be offered in Colchester in the Collector’s sale auction from November 30-December 2. In 1919 artist Paul Nash (1889-1946) settled in the village of Dymchurch on the Romney Marsh in Kent where he stayed for a number of years producing a range of works based on the sea wall and surrounding countryside. More items from the Peter Rose and Albert Gallichan collection come for sale at Lyon & Turnbull in London on November 30.

The core of a remarkable archive of Victorian and later decorative arts was sold at Christie’s earlier in the year.

The 300 lots at L&T include, estimated at £2000-3000, this 9in (22cm) high stoneware grotesque fish jug modelled by Mark Marshall for Doulton Lambeth. The Design for Living sale at The Pedestal in Henley on Thames on November 30 includes this two-sided oil on board by Dod Procter (1892-1972). To one side is a still-life titled Black Jug, to the other an interior scene.

thepedestal.com or see this item at thesaleroom.com The Winter Art Sale at David Duggleby in Scarborough on November 26 features this Émile Gallé (French 1846-1904) faience model of a cat.

Although naturalistically modelled, the 13in (33cm) feline is painted with flowers on blue ground and the neck decorated with a pendant brooch bearing a portrait of a dog. The contents of Grade II* listed Greystoke Castle near Penrith is coming to auction at Mitchells next month with a selection of fine paintings, furniture and Chinese porcelain.

However, some valuable items remained including this pair of mid-18th century Rococo carved wood pier glasses. The mirrors were recovered from a barn where they had been stored in the hay loft. Oil portrait of Lady Foster, later to become the Duchess of Devonshire, possibly by Thomas Gainsborough – estimate £3000-5000 at Jefferys.

A portrait possibly by Thomas Gainsborough will be offered by Cornish auction house Jefferys on December 1.

The oil portrait of Lady Foster, later to become the Duchess of Devonshire, was originally sold in Dorotheum’s Old Masters auction in Vienna in 1997 listed as ‘possibly by Gainsborough'. It achieved 290,000 Austrian Schillings (over £20,000 at the time).

Jefferys says: “A conservative pre-sale estimate of £3000-5000 has been placed to facilitate a sale.” Probably French and perhaps made by Bernard Perrot (1640-1709), a glassmaker of Italian origin who was active in Orléans from 1662, they stand just under 8in (20cm) high. No other similar candlesticks would appear to be recorded in the literature.