The last, however, an elegant Aesthetic movement form with marquetry decoration, was estimated at £700-1000 but sold to a south of England buyer at £26,000.

It breathed quality but at that price something more was clearly in play.

The chaise longue had been identified by knowledgeable bidders as a design by Owen Jones (1809-74) and made by noted London cabinet makers Jackson and Graham. A handful of other examples are known including that made as part of a large suite for James Mason (1824-1903) of Eynsham Hall, Oxfordshire in 1873.

The original watercolour designs for the proposed furnishing of Eynsham are in the collection of the library of Reading University, while elements of the finished furniture were donated to the V&A in 1954 when the building became a police training college. It appears that the upholstered elements were originally covered with a woven Jacquard silk to Jones’ design called Sutherland.

With specialist sales in multiple disciplines now the fashion in Leyburn, the designated Spring Sale on March 19 was much smaller than the mammoth three-day affairs of yesteryear. But the 413 lots totalled £512,740 with a 90% selling rate and covered the field of collecting. The 3ft 3in (1m) wide commode, with later marble top above a cupboard painted with 18th century figures in a landscape, had only minor condition problems and raised Continental interest before selling to a north African bidder at a treble-estimate £22,000.

Most of the better prices for 18th century and earlier furniture came for overseas material.

One was an American cherry and pine-lined Chippendale-style chest of drawers indistinctly inscribed George Yeadly Hudson. The 3ft 9in (1.14m) wide serpentine chest had some condition problems but generated interest among American bidders before selling to one of them at £3000, 10 times the lower estimate. A part 17th century Spanish polychrome and stained oak bed profusely carved all over with saints, angels, cupids, maids, coats of arms was provenanced to musician Ned Lambton, the 7th Earl of Durham. 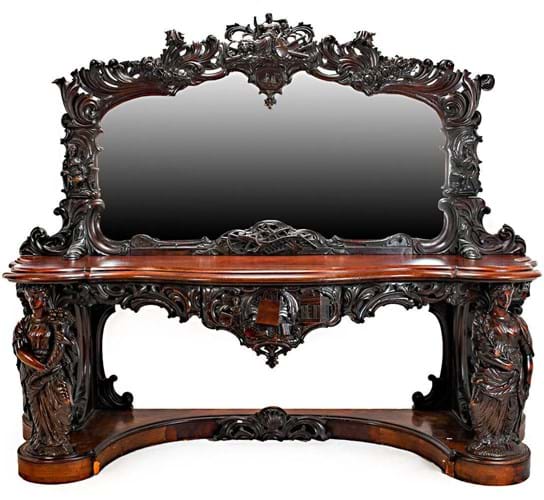 Victorian mahogany sideboard in the manner of Gerrard Robinson – £6000 at Tennants.

The quintessentially Victorian piece, the carved mahogany mirrorback sideboard, is not always an easy sell but the example here doubled the top estimate in selling to a UK private buyer at £6000.

An imposing 9ft wide x 7ft high (2.77 x 2.15m), it was carved to the frame with Britannia and a shipping scene and to the base with Masonic symbols and a platform and neoclassical figural supports. It needed considerable work, some of it after poor restoration. An attribution may be possible to the atelier of Gerrard Robinson (1834-91). Selling to the dependable separate market for Howard & Sons upholstered furniture, particularly from the early years at the Berners Street, Soho, two stamped armchairs sold at £4800 and £4000. Of similar appeal, a pair of mid-19th century mahogany upholstered armchairs, labelled Mackenzie & Crosbie Manufacturers Edinburgh, more than double the low estimate at £5500. Later decorative work brought predictably more. It included an 1872, 14in long x 5¾in high (36 x 14.5cm) Mintons pâte-sur-pâte plaque by Louis Solon depicting Cupid, a soldier and a maiden which went above estimate to a London dealer at £3300.

Among the Continental porcelain, a c.1765 Sèvres miniature teacup and saucer painted and gilded with exotic birds tripled the estimate, going to the Far East at £1300, while best of the Meissen was a late 19th or early 20th century pair of painted parakeets perched on tree stumps sold to a northern collector at £2000. Both went to European bidders. A 2¼in (6cm) tall square brush washer bore a four-character reign mark and seals for Wang Shaowi (1817-87). Painted with a bird on a branch and figure in a landscape in the Qianjiang palette, it was estimated at £300-500 and sold at £12,000.

A pair of 20in (51cm) tall Kangxi yen yen vases painted with the Eight Horses of Mu Wang, cranes and deer on a celadon ground had been reduced in height and suffered some glaze crazing. The later European metal mounts also had some losses but, pitched at £1000-1500, they went to £10,000. On a more domestic note was a set of 12 toleware shop display tea canisters from a deceased estate in Rochdale. Standing 18in (46cm) tall and painted with landscapes in gilt borders on a black background, the 19th century items showed evidence of years but were in untouched, basically good, condition and tripled top hopes at £9000. Mid-17th century needlework of Charles I and Queen Henrietta – £8000 at Tennants.

A consignment of nine mid-17th century needlework panels was topped by one showing Charles I and Queen Henrietta Maria in a fantasy landscape. Measuring 9½ x 12in (24 x 32cm) and in a tortoiseshell frame, it quadrupled the lower estimate selling at £8000.

A timeline of top clocks at Tennants begins in c.1790 with a documented 15-day table clock signed to the 8in (20cm) brass arched dial Thomas De Lasalle, London which took a top-estimate £3500.

An Edwardian tubular bell chiming clock in an 8ft 11in (2.72cm) tall elaborately carved mahogany case doubled mid-expectations, while from c.1980 came a rare pendule d’officier marble mantel timepiece signed Patek Philippe, Geneve. Standing (22cm) high over the handle, it came with its original box and paperwork and, pitched at £2000-3000, sold at £4500. Commissioned from Paul Storr in 1808, a set of 12 soup plates topped a record-setting silver sale on the same day. Entered from a private collection, the anachronistic design reflects that they were made to augment a service Charles Pelham commissioned in 1770 from William Chambers.

Pelham became Baron Yarborough and his son, for whom the service had been a wedding present, became Earl Yarborough in 1837 when his coat of arms was engraved on the plates.