In a Ligurian Garden, a previously missing exhibition work by the British Impressionist Henry Herbert La Thangue (1859-1929), sold for £180,000 (plus buyer’s premium) in the British, European and Sporting Art Sale at Tennants in Leyburn. Known only from a contemporary illustration, this 3ft 6in x 3ft 1in (1.06m x 90cm) oil on canvas was recently rediscovered in Yorkshire.

Tennants said the new owner is a private collector.

A founder member of the New English Art Club, La Thangue acquired a following in his youth as a plein air painter of rural subjects. He first visited Italy in the winter of 1903-04 and from that point until the outbreak of war, views of Liguria appeared in almost every Academy summer exhibition.

Kenneth McConkey, professor emeritus at the University of Northumbria and author of A Painter’s Harvest, HH La Thangue, 1859-1929 (1978), penned the catalogue entry to Tennants’ picture. He referenced a letter written by La Thangue not long before the artist’s death in December 1929.

Replying to an enquiry from the Blackburn Museum and Art Gallery regarding a picture titled Ligurian Flowers, he recalled painting it in ‘1907 or 1908 in one of the villages along the coast’. The picture, he said, had been shown at the Royal Academy in 1908 with a companion piece, a different view of the same girl in a pergola cutting through an orange grove, titled In a Ligurian Garden. 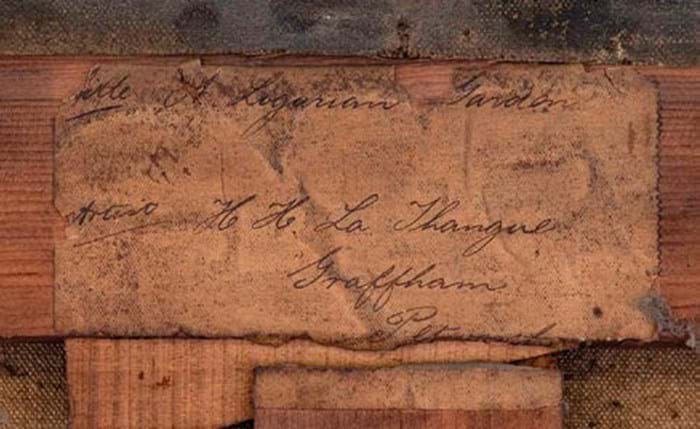 The painting is signed and inscribed on an original artist’s label verso.

La Thangue remembered these canvases “with pleasure for the girl was so exceptionally nice and posed well”, and the garden “where the picture was painted is the one of a fine old house [that] presented even in its ruined state a very beautiful appearance”. He added that he returned a year or two later only to discover that the family had moved and, sadly, their daughter had died.

In a Ligurian Garden was warmly received at the time of its exhibition. The Times called it ‘radiant’ and The Daily Telegraph said the canvas ‘scintillates everywhere’. The Shef field Daily Telegraph concluded that ‘…never has Mr La Thangue given us a more beautiful picture of sunlight than this’.

Tennants said the picture had survived in very good, stable condition, appearing never to have been restored or revarnished.