An Unbroken run of success

A ‘Jolly Roger’ or pirate flag that records the Second World War exploits of a British submarine flew once more in a militaria sale earlier this summer. 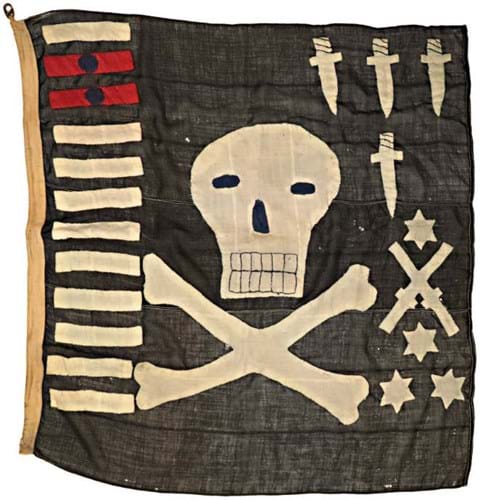 Made by Petty Officer Sharp from odd scraps of material, it reflects the successes of the HMS Unbroken’s mostly Mediterranean operations. The white bars at left represent merchant ships and those in red are warships, while the stars and cannon at lower right represent merchant vessels sunk with the deck gun.

The four daggers signify ‘cloak and dagger’ operations in which Unbroken was involved – two of which related to missions undertaken by Captain Peter Churchill, DSO.

In 1944 Unbroken was loaned to the Soviet Navy but in 1950, shortly after her return to the UK, was scrapped.

Stored in an attic The flag had spent the last 40 years stored in the attic of a house in Weymouth. It was auctioned at the Tank Museum at Bovington, Dorset, by Duke’s (25% buyer’s premium) of Dorchester, selling for £10,000 at the sale on May 14.

Along with photographs, the lot also included an inscribed, presentation copy of submarine commander Lt Commander Alastair Mars’ 1953 book, Unbroken, that is inscribed on the title-page to Sharp.