Jean-Bernard Duvivier’s Head of a Bearded Man, coloured chalk and pastel on paper, is offered at Colnaghi Elliott Master Drawing’s inaugural show, where prices range up to £80,000.

The new enterprise aims to mix Colnaghi’s clout as a seasoned establishment with Elliott’s eye for the art of lesser-known figures.

Jorge Coll, CEO of Colnaghi, said: “I have been very impressed with Elliott Fine Art’s exhibitions so far, with their accessible entry points and rediscovered names. I have always wanted to deal in drawings as per the tradition of the company, and believe the moment is right to reinstate this department.”

It launches, complete with a new logo, with an exhibition during this summer’s London Art Week. The Works on Paper: 1800-1950 show features several female artists such as Virginie Demon-Breton and Antoinette Cécile Hortense Haudebourt- Lescot, depictions of people of colour including a portrait of an Egyptian woman by Jean- Léon Gérôme and other rare works such as a chalk and pastel on paper by Jean- Bernard Duvivier (1762-1837), an 18th century Franco- Flemish artist whose reputation is being re-established.

Elliott, who launched his dealership in 2020, added that it is Colnaghi Elliott’s aim to show works by important names as well as those of “historically marginalised artists who deserve greater recognition”.

Collaboration between dealerships and galleries, particularly larger and smaller enterprises, was heralded in the early days of the pandemic.

Several other trade partnerships this summer suggest the cooperative spirit is still alive and well.

For example, Oliver Forge and Brendan Lynch are collaborating with Claire Brown Art on a major exhibition of ancient Egyptian art, marking the 100th anniversary of Howard Carter’s discovery of the tomb of Tutankhamun. 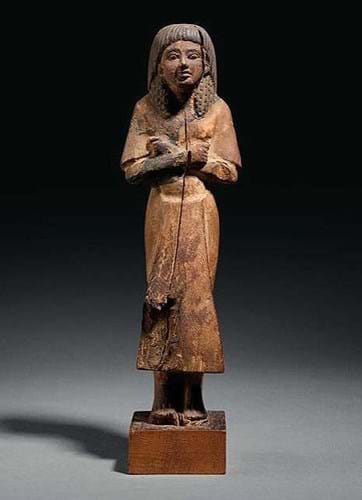 This wood shabti figure wearing a sash kilt is among the works offered from the Christopher Cockerell collection by Forge and Lynch and Claire Brown. Works in the show, Yes, wonderful things: Egyptian Art 3000BC-100AD, are priced from £1000-300,000.

Held in the new Forge and Lynch galleries on Pall Mall in early July, it includes a lecture on the Sotheby’s sale of the MacGregor collection of Egyptian antiquities that also took place in 1922.

Meanwhile, during London Art Week, Trinity Fine Art and Walter Padovani will team up for Sacred & Profane; Italian Terracotta Sculpture from the 16th to the 18th centuries and Georg Laue, Kunstkammer, will contribute to Stuart Lochhead Sculpture’s Vanitas exhibition.