A selection of upcoming lots this summer season from international auctions. A landscape by Ferdinand Hodler Kastanienallee bei Biberist - estimated at SFr2.5-4m at Koller.

Koller is holding its summer auction series in Zurich from June 28 to July 1 featuring sales of Contemporary, Impressionist and Modern and Swiss Art along with jewellery and watches and an auction given over to natural history, space exploration and entertainment memorabilia.

Pictured above is one of the highlights of the Swiss Art sale on July 1: a landscape by Ferdinand Hodler (1853-1918). Kastanienallee bei Biberist depicts an alley of chestnut trees near Biberist. The 15 x 22in (38 x 55cm) oil on canvas in its original frame is signed and inscribed lower right A mon Amie Monsieur Oscar Miller F. Hodler 1898.

After being received by Miller direct from the artist, the painting passed down by descent in a private Swiss collection and was then sold by Christie’s Zurich in 2012, where it was acquired by a private collection in Germany. A few months after selling a still-life by Louyse Moillon (1609/10-96) of a bowl of strawberries, a basket of cherries and branch of gooseberries for an auction record price of €1.3m (£1.1m) in March, Aguttes is to offer another unpublished example by the artist.

Still-life with a basket of plums is dated to c.1634, just a few years after she produced the painting of strawberries and cherries (dated 1631), when the artist, already excelling in this genre of painting, was aged just 24. This later work, from a private French collection, is painted on panel, measures 19 x 15in (48 x 39cm) and is due to be included in the supplement to the catalogue raisonné written by docteur Dominique Alsina. A rediscovered early 18th century terracotta relief attributed to the Genoese-born artist Angelo de Rossi (1671-1715) is to be auctioned on June 18 by Camper Dabernat at the Hôtel des ventes de Corbeil-Essonnes with expertise from the sculpture specialist Cabinet Lacroix-Jeannest.

The terracotta, which measures 21 x 19½ x 4¼in (54 x 50 x 11cm) is executed in a mixture of high and low relief and depicts the Adoration of the Shepherds. It is thought to be the artist’s reception piece of 1711 for the Accademia di San Luca, the prestigious Fine Arts academy in Rome. Mentioned in the archives of the academy until the early 19th century, it then appeared in a private Paris collection, passing down by descent, and was rediscovered by the auction house during the course of an inventory. Estimate €300,000-500,000. 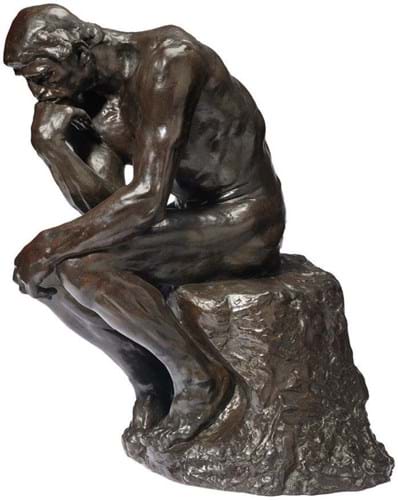 On June 30 Christie’s Paris rooms will be offering the contents of a Parisian apartment on the Quai d’Orsay designed by the interior decorator Alberto Pinto. It features a rich selection of furniture and decorative arts, sculpture and paintings across a wide timespan.

The potential star of the sale, with an estimate of €9m-14m, will be a bronze of Le Penseur (The Thinker) by Auguste Rodin (1840-1917). One of the sculptor’s most famous subjects, it was originally conceived in 1880 as part of his monumental Gates of Hell project. Rodin then produced it as a work in its own right in both colossal and reduced sizes first showing it in public in 1904 in monumental form at the 1904 Paris Salon where it met with widereaching enthusiasm.

Seventeen bronze casts of The Thinker are recorded by the Musée Rodin as being produced during the sculptor’s lifetime by the Griffoul, Francois Rudier and Alexis Rudier foundries.

After Rodin’s death the Alexis Rudier foundry cast another 17 bronzes from 1919-45, of which the version to be offered by Christie’s is an early example dating from c.1928. Measuring 2ft 4in x 16½in x 23 in (71 x 42 x 58cm), it is signed A Rodin to the rock lower right and has the foundry mark Alexis Rudier Fondeur Paris on the back of the rock at the right as well as the raised signature A Rodin inside.

The sculpture has a provenance to the Musée Rodin, Paris; then Weston Thorn, New York, c.1989, and a sale at Sotheby’s New York in November 1989 when it was acquired by the Kobayashi Gallery, Toyko. It then entered a private collection in Japan and was back with the Kobayashi Gallery before its last auction appearance at Christie’s New York in 1996. A collection of works by the 20th century jewellery designer Suzanne Belperron (1900-83) will feature in a sale of jewellery to be held by Beaussant Lefèvre at Drouot on June 23.

The 17 pieces come from the collection of Madame René Dayde, née Andrée Julien (1894-1969), who was an acquaintance of the designer and ordered them from her. They include this bouquet de ballons brooch made in 1950, designed as a bunch of balloons composed of chalcedony cabochons in a variety of colours set in yellow gold. Three massive metal and stained glass cupolas by the master glass artist Eric Bonte will be offered on July 5 at Drouot in a sale of furniture and works of art by Copages Auction.

The cupolas, which were made between four and five years ago, are demountable, each measure 20ft (6m) in diameter and feature a variety of different forms of traditional hand-painted glass decoration. Two of them were formerly exhibited at the Biennale des Antiquaires at the Grand Palais. A period silver print from c.1936 of Picasso at Mougins, part of a photographic archive of work by Dora Maar – estimated at €2500-3500 at Artcurial in Paris. Image: Artcurial.

The archive, the majority of which has never been published, comes from the estate of Maar and will comprise around 750 photographs offered in 400 lots. Each lot comprises an original negative, its period contact proof and a modern print sized 15¾ x12½in (40 x 30 cm) printed specially for the sale. The photographs span her career from the 1920s to the late 1940s, including the years which she spent with Pablo Picasso, and illustrate her involvement with Surrealism as well as an interest in portraiture and everyday scenes.

Pictured here is a period silver print from c.1936 of Picasso at Mougins in the south of France in an armchair made from the trunk of an olive tree. It has an estimate of €2500-3500. Buste d’homme, a late portrait by Pablo Picasso - estimated at SFr2-3m at Koller.

This late portrait by Pablo Picasso (1881- 1973) will be one of the highlights of Koller’s July 1 Impressionist and Modern sale.

Buste d’homme, a 2ft 1½in x 19½in (65 x 50cm) oil on canvas from 1965, shows the subject wearing a signature blue and white striped Breton sailor’s shirt and is signed Picasso upper right and dated 17.2.1965 on the reverse. It comes with a certificate from the Louise Leiris, Paris, the gallery from which the painting was acquired directly from the artist in 1973. It was then with the Galleria Nuovo Sagittario in Milan, then a private collection in Italy from where it has passed by descent to the vendor.

An unusual highlight of Tajan’s sale of Old Master paintings and drawings to be held in its Paris rooms on June 22 will be this 7ft 6in x 3ft 1in (2.3m x 93cm) modello by the Neapolitan baroque artist Francesco Solimena (1657-1747).

It was made in preparation for his decoration of the ceiling of the sacristy of the Church of San Domenico Maggiore in Naples.

Solimena worked on the mammoth 46 x 14½ft (14 x 5m) ceiling fresco from 1705-6. Its subject was the triumph of Faith over Heresy through the intercession of the Dominicans. The artist has shown the Holy Trinity in a light-filled space at the top. In the centre are St Dominic; the Virgin, allegorical figures representing the Catholic Faith and the Church, Patience and Penitence and saints Catherine of Siena, Thomas Aquinas and Peter of Verona. The lower part shows St Michael the Archangel set above naked figures battling heresy.

The modello, pictured above, which is painted in oil on canvas, was intended for the Dominican priests who commissioned the work, so that they could approve it artistically and in terms of the iconography representing their liturgy. They made payments to Solimena between 1704-06, even going over the initial agreed price with an extra payment in 1709. The composition of the modello shows slight variations from the final fresco, pictured in situ below, which, with its light-filled swirling movement, is an example of the transition from the Baroque to the Rococo. The final fresco, pictured in situ, on the ceiling of the sacristy of the Church of San Domenico Maggiore in Naples by Neapolitan baroque artist Francesco Solimena (1657-1747).

It is very unusual to find large-scale modellos painted in oils in such a fine state of preservation on the market. The work, which was in a house in Burgundy for over a century, was rediscovered by the Old Master specialists Cabinet Turquin and was first published in 2018 by Nicola Spinosa in his catalogue raisonné of Solimena.