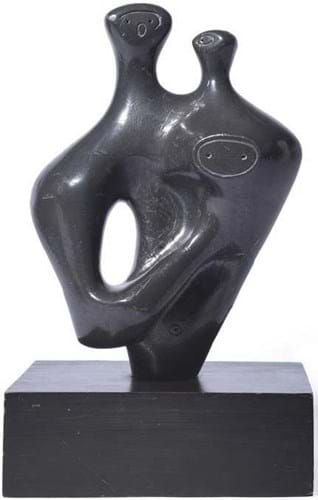 The Berkshire saleroom had worked for two years with the Henry Moore Foundation and the family of the owner, former publisher and editor of The Architectural Review magazine, Hubert de Cronin Hastings (1902-86), to have the cast fully authenticated. The foundation was able to link the work to a 1939 sketch of the sculpture by Moore already held in its records, titled Eighteen Ideas for Sculpture.

The work is cast in lead, which was a material Moore used only for a short period in the late 1930s, during a time when he was experimenting with other materials such as string and wire for his series of sculptures. Mother and Child, conceived in 1939-40 and potentially a unique cast, is believed to be a preliminary design for one of these.

The 7in (17cm) sculpture is believed to have been gifted to Hastings directly by Moore, as they met through The Architectural Review, via Moore’s friend Jim Richards, assistant editor of the magazine at the time. He had befriended the artist after writing an article on his work for the magazine in 1934.

It passed to Hastings’ son John in 1974, remaining on the mantlepiece of his Wiltshire farmhouse until he died in 2019.

It attracted numerous bidders at what was a very attractive estimate. The buyer was a UK private collector.

Clarion brings down prices for summer at the Olympia Grand