A sale titled Design for Living at The Pedestal in Henley-on-Thames on May 17 includes this late 19th century Louis XVI style mahogany and gilt bronze mounted commode à vantaux, above, made after the model created by Joseph Stöckel and Guillaume Benneman for Marie-Antoinette.

thepedestal.com or view this item at thesaleroom.com

This miliarensis struck in Trier, 367-75, deemed ‘extremely fine’, is a large silver coin introduced in the early 4th century and part of the Pewsey Hoard being offered at a London auction on May 17, estimated at £900-1200.

The sale is the first to be held by Noonans (previously Dix Noonan Webb) of Mayfair under its new shortened name.

The hoard of silver Roman coins was discovered in September 2020, after the first Covid lockdown had finished, by three metal-detectorists. Over the course of the weekend they found 161 coins in total, comprising silver siliqua and miliarense dating from 340-402AD.

Noonans is selling 142 of them. Nigel Mills, consultant (artefacts and antiquities) at Noonans, says: “Virtually all of the coins are in mint condition and have not even needed to be cleaned since their discovery. The hoard was buried at a time when Roman rule in Britain under the Emperor Honorius was no longer viable, with the army being recalled to protect other provinces. In 410AD Britain was told to protect itself by Honorius.” This 16th century Bible in English will go under the hammer at Keys of Aylsham estimated at £1500-2000.

Published by Christopher Barker in 1583, the black letter volume of the ‘Bishop’s Bible’ will be in the Norfolk firm’s two-day Book and Ephemera Sale on May 11-12.

A wealthy member of the Draper’s Company, Barker was a shrewd businessman who managed to acquire the lucrative Bible Patent. As the ‘Queen’s Printer’, he was one of only three publishers who could produce the authorised version of the Bible – the other two being the Oxford and Cambridge University Presses. He died in 1599 a wealthy man, and passed on his patent to his son Robert.

keysauctions.co.uk or view this item at thesaleroom.com

Bovey Pottery character figurine of an RAF pilot from the Our Gang series – estimate at £80-120 in a timed online sale held by East Bristol Auctions.

This Bovey Pottery character figurine of an RAF pilot with a flying helmet, goggles, flight suit and parachute harness is one of a group of six figures from the Our Gang series designed by Fenton Wyness and modelled by Gwyneth Holt.

Three of them, including this one, are guided at £80-£120 each in a timed online sale held by East Bristol Auctions ending on May 17. Interest is such that bids for all three have already reached multiples of the top estimate.

eastbristol.co.uk or view this item at thesaleroom.com This work is titled Eyles of Bute looking North in Salmon’s stock book and can be found under the heading of ‘Special Paintings’. It was painted while Salmon was resident in Boston (and sold there in an auction in 1828 for $7.50) so the view was presumably taken from a combination of his own sketches and memory of his homeland. Leaf-cut picture offered as part of a group of Victorian ephemera – estimate £150-250 at Tennants.

This leaf-cut picture is offered as part of a group of Victorian ephemera (estimate £150-250) included in Tennants’ Books, Maps and Manuscripts sale in Leyburn on May 18.

A detailed silhouette of workers around a derelict tower and trees has been created by scraping back the outer layers of the leaf, with a delicate skeleton of the leaf’s ribs and veins remaining as a transparent background. Oil on board by Alexander Jamieson titled verso On The Seine, Paris, View of the Pont Neuf – estimate £1500-2500 at McTear’s.

The picture auction at McTear’s in Glasgow – a timed online sale closing on May 15 – includes this oil on board by Alexander Jamieson (1873- 1937) titled verso On The Seine, Paris, View of the Pont Neuf.

Jamieson was born in Glasgow and studied at the Haldane Academy before winning a scholarship to Paris in 1898.

In his foreword to Jamieson’s memorial exhibition, Sir John Lavery wrote: “He dipped his brush in light and air … Many a time I have been struck by his wonderful perception and clear judgement, his keen sense of colour and composition, allied with a masterly technique, which enabled him to convey his impression in the simplest language.”

mctears.co.uk or view this item at thesaleroom.com

The figure comes with a thermoluminescence report from Oxford Authentication. It is from an East Anglian private collection and was formerly acquired in the early 1990s in Hong Kong.

apollogalleries.com or view this item at thesaleroom.com Café Vernet, Dieppe was sketched c.1920 while Sickert was living in France. The drawing is extensively annotated in English and French with colour notes and comments including light froth cold drink with a line pointing to a glass and colour of my drawing room walls.

roseberys.co.uk or view this item at thesaleroom.com The Fine Paintings & Frames sale at Parker Fine Art Auctions in Farnham on May 12 includes a number of works that come directly from the family of Thomas Allom (1804-72).

This pencil and wash drawing of The National Gallery, Trafalgar Square on joined paper with Horse Guards on Parade below has an estimate of £300-500.

parkerfineartauctions.com or view this item at thesaleroom.com The Five Centuries sale at Lyon & Turnbull in Edinburgh on May 18-19 includes this Victorian painted advertising chest estimated at £2500-3500.

Decorated with various mottos and slogans, it advertises Ede’s Patent American Eye Liquid – a quack cure for every disease of the eye. Where exactly the American connection comes from is not clear. Although Ede declared his Eye Liquid’s worldwide fame and demand, nearly all the ads for the product are in Birmingham papers in the 1870s.

lyonandturnbull.com or view this item at thesaleroom.com This cabochon coral and brilliant-cut diamond cocktail ring by Cartier dates from c.1955.

Alongside French assay marks it has the maker’s mark for Péry & Fils, who worked with many jewellers housed in the Place Vendôme and collaborated with Bulgari, Cartier, Boucheron, Mauboussin, Templier and Tiffany. Pencil and sketch signed and titled The Parasol Mushroom by John Northcote Nash – estimate £400-600 at Mallams.

The Modern Art & Design sale at Mallams in Oxford on May 18-19 includes this pencil and sketch signed and titled The Parasol Mushroom by John Northcote Nash (1893-1977). It comes for sale from the estate of Patrick Docker-Drysdale, a Canadian linguistics expert who lived at Wick Hall, Radley.

mallams.co.uk or view this item at thesaleroom.com A sale of Asian art at Ma San Auction in Bath on May 12 includes this pair of Qing dynasty painted applique scenes that come for sale from Eynsham Hall, North Leigh, Oxfordshire.

The courtyard scenes full of various military figures, performers and Daoist figures are made by layering painted cut-outs of paper and padded silk as well as adding other elements such as hair for beards.

masanauction.com or view this item at thesaleroom.com 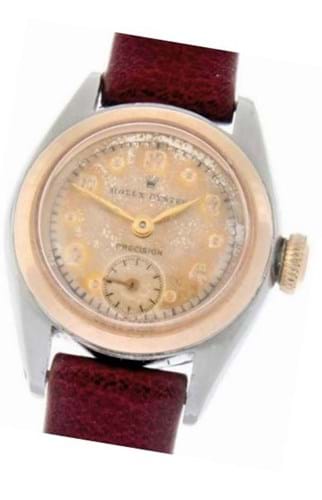 The Luxury Watch sale at Fellows in Birmingham on May 16 includes, estimated at £550-750, this Rolex Oyster Precision bi-metal watch c.1958.

fellows.co.uk or view this item at thesaleroom.com

By Riccardi for Medici