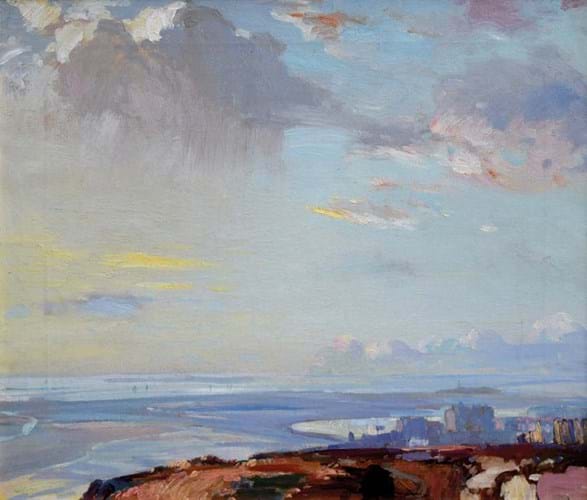 The Sands of Dee from Caldy, Cheshire by Samuel John Lamorna Birch – £3400 at Peter Wilson.

The Sands of Dee from Caldy, Cheshire, a 20in x 2ft (50 x 60cm) oil on canvas, is believed to date from 1916 when Birch was the house guest of Percy Eccles at Caldy Manor in Wirral.

The artist’s diary entry for December 8 recalls that he had “a strenuous day… I think I have done a real masterpiece… certainly the best thing I’ve done since I came here. It is a sketch overlooking the Dee, a sunset effect with the channels reflecting the sky and a suggestion of a town in the middle distance. I did make paint fly, and no mistake!”

Eccles was a great admirer of Birch’s work and it is thought that he bought the painting from the artist. Subsequently, it was with the London dealers Frost and Reed and then entered the collection of Lord Sheppard, the Bishop of Liverpool and former England cricketer who lived in West Kirby. It attracted interest at £2000-3000, selling for £3400.