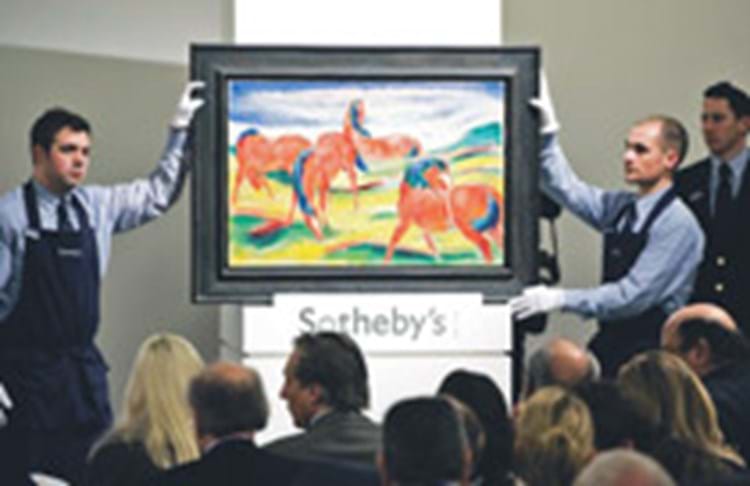 Giacometti's L'Homme qui Marche I that made £58m at Sotheby's on February 3.

Solid rather than spectacular results characterised last week's run of high-profile art sales in London. Despite the turmoil in the money markets there was consistently strong bidding for the best works at three 'evening' sales that saw more than £260m worth of art sold.

Christie's, whose Contemporary sale boasted the highest price of the series, began their most important London dates with an Impressionist and Modern Art sale (including 35 lots in a separate catalogue titled The Art of the Surreal) on February 6.

The top lot of the sale at £5.1m was Picasso's 1938 Femme au chapeau, - a picture that had failed to sell in 2002, but the sale was heavily weighted towards German and Austrian art. One of the more animated sections included eight works by Egon Schiele (1890-1918). These were entered by Ronald Lauder's Neue Galerie in New York to help fund the acquisition of Gustav Klimt's Adele Bloch-Bauer I for the record price of $135 million in June 2006.

American buyers were conspicuous by their absence, buying just 15 per cent of the lots against 83 per cent bought by Europeans.

A sale of works on paper and a secondary sale added a further £17.7m to the hammer total.

With Sotheby's holding back their Contemporary art for a stand-alone event at the end of the month, their early February eggs were all in the Impressionist and Modern basket.

Their main evening sale was less than two-thirds the size of their competitors' but it made substantially more at £103m, boosted by record-breaking German Expressionist results of £11m for Franz Marc and £8.4m for Alexej von Jawlensky and stronger than predicted prices for several other works such as pastels by Renoir and Degas, a Giacometti painting and a Matisse charcoal.

With only nine of the 76 lots failing to sell there was also a lower buy-in rate. The £103m total, which compared with pre-sale estimate of £81-£112.1m, produced the auction house's highest ever total in Europe, surpassed only by Christie's equivalent auction last June (£107m).

Russian activity was the talking point amongst the press in the immediate aftermath and Sotheby's buying breakdown confirmed that 15 per cent by lot went to Russia. Europe claimed the highest proportion at 67 per cent with Americans taking 13 per cent of lots.

The auction house added a further £23.2m to their overall hammer tally via their part two sales the following day.

With Sotheby's and Phillips de Pury staging their contemporary sales at the end of the month, Christie's Post-War and Contemporary evening sale on February 6 was billed by commentators as the first chance of 2008 to see how this booming market would fare against the turbulent climate in the financial sector and fears of a forthcoming recession.

Results showed that there was a noticeable, but not spectacular, cooling. The auctioneers announced immediately after the sale that results had been "incredibly solid" and that the £64.5m hammer total represented the second highest amount ever seen at such a sale.

But with over 30 per cent of the lots unsold, including four works with guarantees, the sale fell short of its £72m-100m pre-sale estimate.

Christie's achieved the highest price for a post-War work of art sold in Europe when Francis Bacon's Triptych 1974-77 was knocked down at £23.5m to a unindentified man standing in the doorway to the saleroom.

However, the price was below its £25m low estimate and there was only one other interested party in the room.

Although the unsolds included works by some of the big names in the market like Andy Warhol, Mark Rothko and Damien Hirst, records were set for Gerhard Richter (b.1932) when Zwei Liebespaare sold to a US private at £6.5m and also for Lucio Fontana (1899-1968) whose Concetto Spaziale made £6m.