Recently sold at auction, three examples of the well-known Nelson memorial vinaigrette made by Matthew Linwood of Birmingham in 1805 sold for markedly different prices – and for good reason. 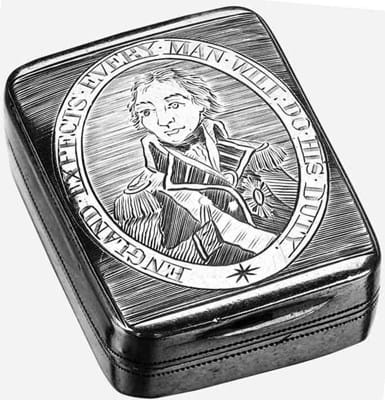 Specialist opinion was that two were later engraved.

The example seen at Duke's (19.5% buyer's premium) of Dorchester on November 27 was the 'cheapest' of the quartet, selling at its low estimate of £1200. Like all these Linwood models it contains the distinctive silver-gilt Victory grille dated Trafalgar October 21, 1805 but, like many, it was originally sold with a plain case. Some rather lacklustre engraving was added later to improve its commercial appeal.

The engraving to the example seen at Salisbury's Woolley & Wallis (19.5% buyer's premium) on October 28 was of a much higher standard but it has a glaring error suggesting the embellishment was added later on the request of George Petzall.

Nelson's actual signal England expects every man will do his duty. Nevertheless it took £2200.

The example seen at Lyon & Turnbull (25% buyer's premium) in Edinburgh on December 2 was quite rightly the most expensive of the three pictured here as the engraving is almost certainly of the period.

…and something to write home about from a duke

A Stuart allegory translated at £9000