The eagerly anticipated auction of Underground posters direct from the archives of London Transport Museum was a sell-out at Christie’s South Kensington earlier this month. 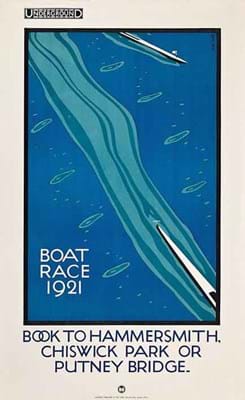 Billed as an "unrivalled and never-to-be-repeated opportunity", the 326-lot sale on October 4 was attended by a large number of London-based private buyers and took eight hours to disperse, exceeding the pre-sale target by some margin to total £821,600.

Hand-picked by Christie's from over 5500 designs, these were duplicate copies or 'spares' from the museum's archives and were being sold to raise money for its vast poster and artwork collection which comprises some 40,500 pieces.

The man who started it all was Frank Pick (1878-1941), responsible for implementing a vibrant poster campaign to improve publicity for the failing Underground in the 1900s. Over several decades, he used some of the best designers of the times to produce eye-catching and stylish posters promoting not only the Tube but most attractions within its reach as well. From the outset they proved hugely popular with the travelling public who were able to purchase copies from the company's head office for between two and five shillings.

From the earliest poster dated to 1913 to the latest in 1955, Christie's selection covered the majority of Pick's tenure at the company. They included works by a number of commercial artists who made their names on the Underground hoardings such as Edward McKnight Kauffer (1890-1945), Edward Bawden (1903-1989) and Tom Eckersley (1914-1997) in addition to an array of other names associated with 20th century design.

The top ten lots at the sale dated from the 1920s and 30s, widely considered the golden age of poster design when the company was regarded as a leading patron of the arts. Designers inspired by Cubism, Futurism and its British counterpart Vorticism produced posters that were striking, bold, geometric and abstract.

Among the known artists Pick commissioned during this period was Edward Wadsworth (1889-1949). A signatory of the Vorticist manifesto in 1914, Wadsworth's emphasis on dynamism and speed lent itself to the adventurous poster designs Pick strove for. Imperial War Museum from 1936 is one of the rarest of his posters for the Underground and is a version of his 1919 painting Dazzle Ships in Drydock at Liverpool.

Man Ray's Keep London Going from 1939, depicting the Underground symbol suspended like a planet, remains the most expensive travel poster sold at auction when it fetched £42,000 at CSK in June 2007. The design was not included in this sale.

Under the pseudonym Andrew Power, Sybil Andrews (1898-1992), a founding member of the Grosvenor School, produced a number of posters for the Underground in the 1930s.

Wimbledon, a 3ft 3in x 2ft (1m x 62cm) work for the annual tournament, demonstrates Andrews' ideas of speed and movement by presenting the tennis players as rhythmic and dynamic machines. In A- condition, it easily doubled the estimate to fetch £20,000 from a UK private buyer. In 2010, Swann Galleries of New York sold another example in condition A for a premium-inclusive $24,000.

Rowing was another sport which successfully lent itself to the medium during this period and was used on many occasions by the Underground to promote travel to the annual Oxford and Cambridge Boat Race. One of the sale's strongest sections, it included a rare design by Charles Paine (1895-1967) for the Boat Race of 1921 which Cambridge won by a length. Measuring 3ft 4in x 2ft 1in (1.02m x 64cm), the simple but striking poster fetched £24,000 - well above the £2000-3000 estimate.

An uncommissioned spare-time project, Beck abandoned the rules of scale and geometric accuracy to create the iconic Tube map which London Underground tentatively introduced to the public in 1933. Maps of the Underground pre-Beck were also on offer, the earliest dating from 1919 which sold over estimate for £3500.

Renowned for his sharp wit and observational humour, Cyril Kenneth Bird (1887-1965), known by his pen name Fougasse - meaning small unpredictable landmine - produced a number of memorable posters for London Underground between 1925 and 1944.

A selection of his Tube etiquette cartoons dating from his final year with the company were on here. All five lots went to a single collector bidding on the phone who spent a total of £11,200 to secure them. Please Pass Along the Platform and Please Have Your Ticket Ready  nearly doubled estimates to fetch £2400 and £2200 respectively. Both measured 2ft x 19in (62 x 50cm) and were in condition A-.