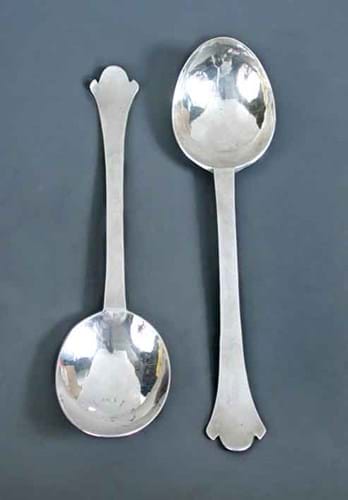 The pair of Dublin trefid spoons that sold for £25,000 at Cheffins in Cambridge.

Pairs are rarer still, with just one recorded (those by Abel Ram, 1663 mentioned in Irish Stuart Silver by Tony Sweeney) prior to the emergence of another at Cheffins in Cambridge.

These 4oz Charles II spoons without rat tails were engraved to the tapering stems with the monogram SSM and carry very clear marks, shown below, for Dublin (the crowned harp), 1676 (a gothic letter B) and the maker Edward Swann.

There were some discreet signs of repair to the heel and bowl of one, but both were considered to have survived in good condition.

Cheffins' specialist Richard Heywood said the spoons had come to the sale on June 18 from a family north of Cambridge where they had been for three generations, but their history beyond that is not recorded.

With the estimate set at a very attractive £800-1200, they sparked international interest before selling to a buyer from Ireland at £25,000 (plus 20% buyer's premium).

The price paid may be the highest ever for Irish flatware.