The original artwork for the cover of The Mighty Thor, published by Marvel Comics in 1968, sold for £36,000 at a recent auction at Charterhouse in Sherborne, Dorset. 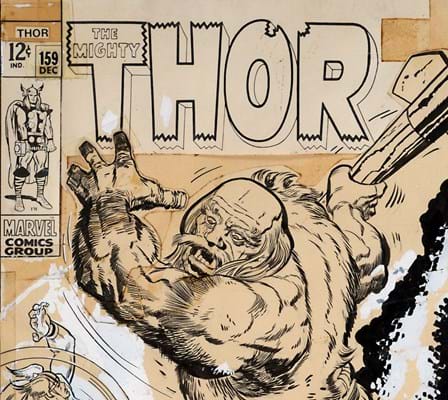 The 17 x 11½in (44 x 29cm) ink and white paint ‘paste-up’ was created by Jack Kirby (1917-94) and Vince Colletta (1923-91) – both legendary names in comic book art. Prolific artist, writer and editor Kirby is widely regarded as one of the medium’s major innovators who co-created many of Marvel’s major characters, including the Fantastic Four, the X-Men and the Hulk. 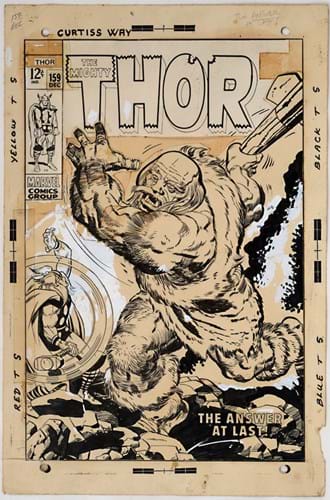 The original artwork for ‘The Mighty Thor’ comic that sold for £36,000 at Charterhouse in Sherborne, Dorset.

As an inker for Marvel in the 1960s, Colletta worked on nearly every title including Kirkby’s creation The Mighty Thor across its six-year run from 1962.

This rare survivor from the so-called Silver Age of comic books (published in issue 159, December 1968) had hung in the vendor’s bedroom from the early 1970s. Her father was a creative designer who worked on advertising campaigns such as Old Spice and Castrol engine oil, and it is assumed he acquired it from a colleague or associate at this time. Although creased and stained in parts, it was in good condition with all elements of the ‘paste-up’ having been preserved under glass.