Titanic key and postcards among highlights of Henry Aldridge auction

A key which opened a life-jacket locker on the Titanic was one of the highlights of Henry Aldridge & Son’s auction last week. 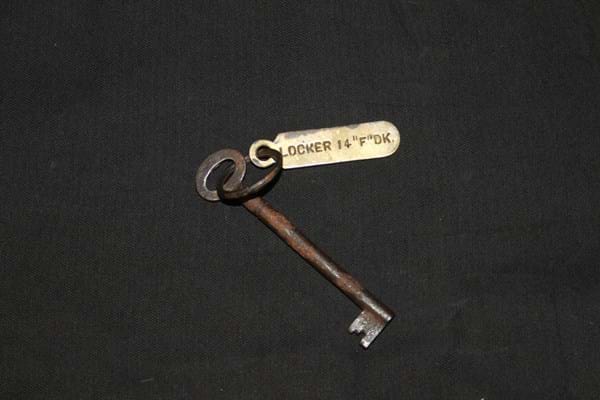 The key, one of more than 200 lots offered for sale in Devizes, Wiltshire on October 22, came via direct descent from a steward on the ill-fated vessel. This was the first time it had been offered for auction. It was hammered down at £68,000, against a high estimate of £50,000.

The key has a brass tag stamped Locker 14 F Deck and was found with Third Class Steward Sidney Sedunary.

His body was recovered by CS Mackay-Bennett, the cable repair ship that was one of the vessels tasked with finding the victims in the wreck of the iceberg struck ship.

His personal effects, including this key, were sent back to his wife Madge who was pregnant with his unborn son who was born in November 1912 and named after his father.

“Sacrificed his life to save others”

The significance of this key related to evidence given at a British Wreck Commissioner's Inquiry by Steward John Hart which revealed Sedunary had heroically worked on Titanic’s F Deck, as it became flooded.

Auctioneer Andrew Aldridge said the amount the key finally sold for "reflected its importance and unique nature". He added: “Here's a man who sacrificed his life to save others."

Sedunary's son gave the key to a family member visiting from Australia in 1981 together with some copper coins that were also found alongside the key. Copies of a diary from the visit were included with the lot which mentions the key, letters from Sid Sedunary Jnr and a letter from the vendor's mother confirming its provenance. On the day, it was knocked down to a UK based collector on the telephone, who outbid interest in the room and online. This postcard, which was sent by the Titanic's chief wireless operator Jack Phillips in April 1912, sold for £15,000 at Henry Aldridge & Son’s auction on October 22.

Another highlight was a postcard sent by the ship's chief wireless operator Jack Phillips which sold for £15,000.

One of the world’s most expensive postcards, it was written by Phillips on April 6, 1912.

Elsewhere at the auction, a bag that contained the personal effects of Titanic baker John Davies sold for £19,000. This bag, that contained the personal effects of Titanic baker John Davies, sold for £19,000 at Henry Aldridge & Son’s auction on October 22.

Henry Aldridge & Son, which is well-known for its Titanic memorabilia auctions, will hold its next auction of memorabilia on April 22 next year and it is now accepting consignments.