A 3000-year-old Assyrian relief unearthed from the royal palace at Nimrud will be offered at Christie’s New York on October 31. It is expected to exceed $10m. The large-scale gypsum stone relief depicting a winged deity measures over 7ft (2.13m) high and once adorned the walls of King Ashurnasirpal II’s (c.883-859BC) massive palace in modern-day Iraq. The royal palace at Nimrud was one of the largest in antiquity, underlining Ashurnasirpal’s status as the most powerful ruler of the largest empire ever seen at the time. 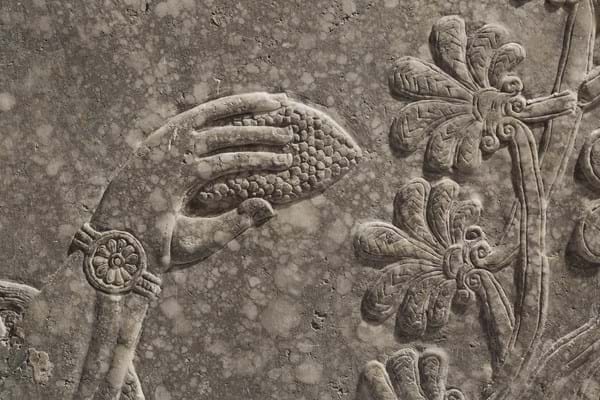 The relief at Christie’s depicts a ‘Winged Genius’, a deity also known as an Apkallu, holding a bucket and a cone-shaped object, signifying fertility and protection for the king.

The skill of the carving is immediately evident with its details nearly all preserved – the Apkallu has feathered wings and wears elaborate robes, a horned headdress, an earring, a necklace and armlets. He also has two daggers and a whetstone tucked into fabric folds at his waist.

The Assyrian relief has relief is one of the earliest pieces of ancient art in the US. It has come to Christie’s from the Virginia Theological Seminary and is being sold to underwrite a scholarship fund.

It was acquired in Mosul in 1859 by an American missionary named Dr Henri Byron Haskell from the English archaeologist Sir Austen Henry Layard, who had excavated the royal palace at Nimrud. As well as this this relief, which has been housed at the Virginia Theological Seminary since 1860, Haskell sent five other examples to Bowdoin College in Maine and another which is now housed at the Metropolitan Museum of Art in New York. Christie’s international head of antiquities, G Max Bernheimer, said: “This Assyrian relief is without question the most exquisite to come to the market in more than a generation, in terms of the style, condition and subject.”