ATG’s selection of highlights sold at auctions held over the last seven days, including a rare 18th century Italian corkscrew and a Napoleonic officer’s coat. 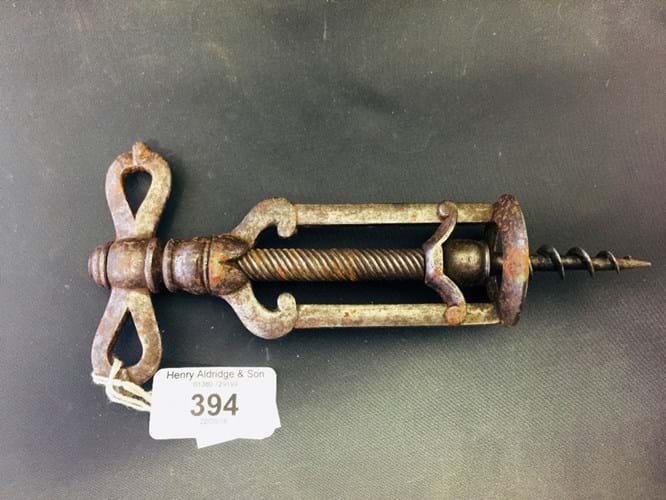 A collection of more than 400 corkscrews, assembled over 40 years by an “old-school connoisseur”, is currently being sold across a number of sales by Henry Aldridge & Son in Devizes. Some items have not been seen in public since the 1970s and the entire collection is valued in six figures.

Two early French pocket corkscrews sold at £12,000 each when the first tranche was offered in 46 lots in July. There were more impressive results posted on September 22 including a third bid of £12,000 (plus premium) for a rare 18th century Italian corkscrew with an early centre screw. A pair of Dutch Delft earthenware figures of seated hounds – £6000 at Tennants.

Dated ceramics always command a premium. This pair of 5.5in (14cm) Dutch Delft earthenware figures of seated hounds, naturalistically modelled and with blue spotted decoration are inscribed to the oval bases 17 TI 68.

They had some condition issues (one of the heads had been smashed and reglued) but they sold at Tennants of Leyburn on September 21 via thesaleroom.com at £6000 (plus buyer’s premium).

The estimate had been just £80-120 with the auctioneers believing them to be 19th century copies.

Ornamental figures of dogs were produced in Delft from the early 18th century –based on either prints or the similar models made in Chinese porcelain and imported by the Dutch East India Company or VOC. A 1779 inventory made after the death of a former Delftware factory owner mentions figures of dogs found on the dining room mantelpiece, and several more figures in the kitchen along with the more typical Delft domestic wares. This dark blue and gilt metal frock coat (l'habit de grand uniforme d'officier général) sold by Mellors & Kirk of Nottingham once belonged to a high ranking officer of the Grande Armée. By family repute it had been the property of Joseph-Napoleon Bonaparte (1768-1844), King of Spain (1808-1813) and had been acquired in the wake of the Battle of Vitoria (June 21, 1813).

While the auctioneers made no warranty that the coat was personal to Joseph Bonaparte – as a monarch Joseph would not have worn a coat of this type – it had been among the many spoils of war seized by Wellington's officers and men after the imperial baggage train of over 100 wagons retreated through Vitoria's narrow streets.

Noticing an intoxicated British soldier wearing the coat, Lieutenant the Hon. John Nevill of the 23rd Regiment of Foot, ordered the man to hand it over.

Nevill, who later inherited the earldom of Abergavenny and took holy orders, brought the coat with him to the family seat of Eridge Castle, Sussex. It came by descent to the present vendors, selling within hopes at £17,000 (plus premium) at the auction on September 19. A popular lot at Gorringes of Lewes on September 25 was this 2ft 8in x 2ft 4in (81 x 70cm) British Impressionism oil on canvas by Dorothea Sharp (1874-1955). The very typical subject for Sharp of children and goats on a cliff top is probably set in Cornwall where the artist, who was born in Dartford, Kent, visited regularly in the 1920s and 30s. A recently discovered painting by one of the best-known French Orientalist artists, Jean-Léon Gérôme, led the sale of American and European works of Art at Skinner in Boston on September 21.

At least three different versions of this subject are known, as well as numerous reproductions and copies. The scene titled Evening Prayer shows men in various positions associated with the prayer, performed on the housetops of Cairo as well as architecturally identifiable buildings.

The 19½in x 2ft 8in (49.5 x 81cm) oil painted on a cradled mahogany panel had been in two English collections by 1870 and an East Coast American one 15 years later. It is signed JL Gerome in characteristic form along the edge of the wall of the roof. Authenticated by Orientalist authority Dr Emily Weeks, it fell a little short of expectations when it took $350,000 (£270,000).