A group of 66 letters from the collection of an important patron of Pre-Raphaelite artists raised a £25,000 total at Shropshire auctioneers Trevanion & Dean. The 66 letters were all written to members of the Ionides family, a dynasty of British art patrons and collectors of Greek ancestry. Most were addressed to Constantine Alexander Ionides (1833-1900) who left a bequest of over 1000 paintings, drawings and prints to the Victoria & Albert Museum on his death.

They included 17 letters from founder member of the Pre-Raphaelite Brotherhood Dante Gabriel Rossetti (1828-1882).

The auctioneers, who said the cache was unearthed in a routine house clearance, grouped the letters into 28 lots. They transcribed the letters for the catalogue and informed interested parties of the consignment ahead of the the auction on September 15.

On the day, they all sold with approximately 80% of the collection going to one UK-based buyer.

Trevanion & Dean also reported buying from the London trade and private collectors along with international underbidding online. The auctioneers said they were “quite confident that all of the collection will remain inside the UK”. In total, the 28 lots raised £25,000, well above their combined £3000-5000 estimate, with the highest individual price coming for a five handwritten and signed letters by Rossetti to Ionides concerning the painting The Day Dream which the artist completed in 1880.

The painting, which depicts Jane Morris seated holding the bough of a sycamore tree was commissioned by Ionides and it was later bequeathed to the V&A museum on his death, where it remains to this day. In one of the letters Rossetti wrote: “The Day Dream continues to get beautiful touches now and then when anything strikes me and I am glad to find it a prize favourite with all beholders.” 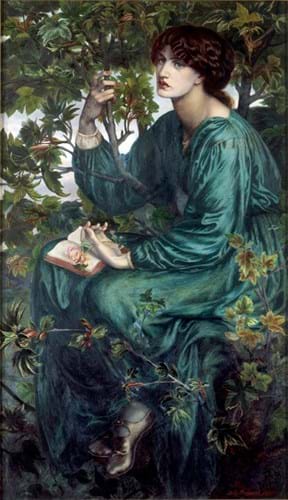 ‘The Day Dream’ by Dante Gabriel Rossetti which was bequeathed to the V&A by Constantine Alexander Ionides. Image via Wikimedia Commons.

Also drawing competition was another group of three Rossetti letters, including one where the artists thanks his patron for a cheque of 300 Guineas. Estimated at £200-300, it sold at £1700.