Six highlights from the Modern British art market in 2018

ATG selects six stand-out lots of Modern British art that sold in London and across the UK in 2018. John Minton’s (1917-57) pen and ink drawing Summer Landscape was the stand-out entry at Bonhams’ sale in New Bond Street in London in June.

The work, which was executed in 1945 after visits to south Cornwall clearly showed the abiding influence on Minton of the etchings and drawings of 19th century landscape Romantic painter Samuel Palmer.

Matthew Bradbury, Bonhams director of Modern British and Irish art, described the work as “mesmeric… in which the figures and the landscape meld into one. It’s a highly accomplished composition by an artist at the peak of his powers.” A highlight of Sotheby’s Modern British art sale in London in November was William Roberts’ (1895-1980) evocative oil The Joke, which was appearing on the market for the first time.

Depicting the heady Bohemian London nightlife in the 1920s, it dated to a key period of Roberts’ career, when he was producing his most accomplished and original compositions.

Acquired by the grandfather of the previous owner from Roberts’ first solo exhibition in 1923, it sold comfortably over estimate at £820,000 – the second-highest price for the artist at auction. Setting a record for the artist and a record for any work by a Scottish Colourist, Still Life with Tulips was deemed a fine example of Samuel John Peploe’s (1871-1935) numerous still-lifes.

Its combination of harmonious composition, bold colouring and size – at 2ft 6in x 2ft 1in (76 x 64cm) the oil on canvas from c.1919 was relatively large for a Peploe – made it particularly appealing to bidders. A watercolour of Ives Farm in Great Bardfield at dusk by Edward Bawden (1903-89) came up at Canterbury Auction Galleries in October. The work, titled July 9pm and dated 1937, was exhibited two years ago at the Fry Art Gallery in Saffron Walden and is illustrated in James Russell’s book The Lost Watercolours of Edward Bawden published in 2016.

Consigned from a local private collection and estimated at £4000-6000, it was knocked down at £9500 to a London internet buyer bidding on thesaleroom.com. 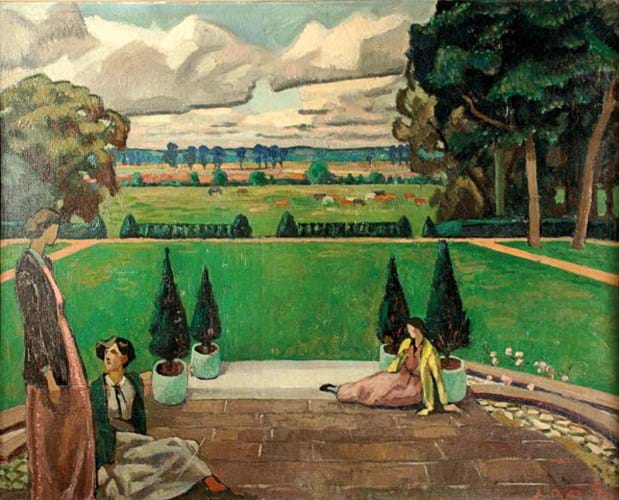 A picture by Roger Fry (1886-1934) depicting the gardens of Garsington Manor near Oxford, the home of Bloomsbury Group socialite Lady Ottoline Morrell, drew strong bidding at Holloway’s in Banbury in February.

With an inscription probably referring to the date 1919, and a Fine Art Society label, it went well above its attractive £2000-3000 estimate to sell for £16,000 to a UK buyer, one of six phone bidders on the lot. One of the most expensive pieces of pictures ever sold at Roseberys, Pony by British artist Patrick Caulfield (1936-2005) was offered at the south London saleroom in September with a punchy-looking estimate of £300,000-500,000. It was appearing on the open market for the first time since its original purchase directly from the artist in the year of its conception in 1964.

Although it got away below estimate at £220,000, the sum fetched ranked as the third highest for a picture at Roseberys.