What lots caught bidders’ eyes this week? Five auction highlights including a dated slipware jug from the time of Charles I and a Beswick huntsman figure

ATG’s selection of hammer highlights over the past week include a portrait of a red bonnet-wearing lady, a Beswick huntsman figure and slipware jug from the time of Charles I. 1. A portrait of a young lady wearing a red bonnet 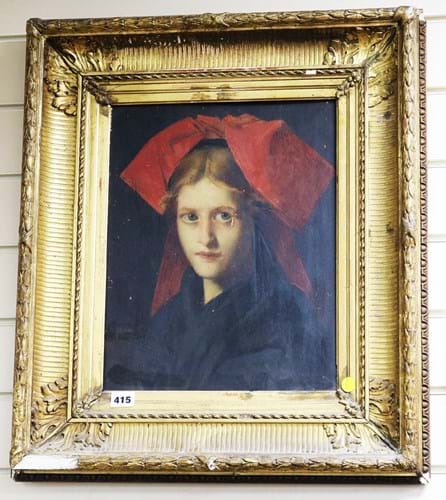 A small oil on panel portrait of a young lady wearing a red bonnet sold for an unexpected £3200 at Gorringes in Lewes.

This small oil on panel portrait of a young lady wearing a red bonnet sold for an unexpected £3200 at Gorringes in Lewes on December 17. The winning bidder was using thesaleroom.com. A clue to the 16 x 12in (39 x 31cm) painting’s appeal is the signature J Henner, possibly for the well-regarded Alsace-born artist Jean-Jacques Henner (1829-1905). Painting redheads and nudes with red hair was his calling card. The average button accordion is not a great draw at auction but those by Paolo Soprani are the exception. Soprani accordions, still made in Castelfidardo where Paolo Soprani first began making instruments in the 1860s, carry a cachet amongst folk musicians. This example in a red marble finish, with original case, took £1250 at Gardiner Houlgate of Corsham on December 14. Huntsman On A Rearing Horse is among the Beswick factory’s best known figures. It sold at £1950 at Adam Partridge.

Huntsman On A Rearing Horse, model no.868, is among the Beswick factory’s best known figures. Modelled by Arthur Gredington, it was first issued in 1940 with a second modified version - giving greater animation to rider and horse - introduced in 1952. Key to pricing is the colour of the horse. While the standard brown version is relatively common, harder to find are those in white and rarer still are the versions in palomino, chestnut and rocking horse grey. All of this does much to explain why this lot - a Beswick hunting set including a huntsman on a rearing palomino horse, was competed to £1950 at Adam Partridge in Macclesfield on December 16. In good condition, save a small nibble to the horse’s right ear, the winning bid, many times the estimate, came via thesaleroom.com.

One of a cased set of three Chinese scroll paintings on silk that sold for £9800 at Lacy Scott & Knight.

Pictured here is one of a cased set of three Chinese scroll paintings on silk, each depicting ceremonial figure scenes, that sold for £9800 at Lacy Scott & Knight of Bury St Edmunds on December 15. It was one of a number of eagerly-contested Chinese objects that came for sale from the family of Otto Frederick Krebs (1838-1913), a Danish engineer who worked for Mitsubishi in Japan for over 20 years. A copy of a letter from Andre Leth, a former director of the Danish Museum of Art & Design in Copenhagen, was included with the scrolls stating that they were probably from the late Ming period and later mounted in Japan. Leth then declines the offer of the scrolls for the museum due to their fragmentary nature. The full roll of three paintings measures 7ft 11in x 2ft 3in (2.42m x 70cm).

5.  A slipware jug from the time of Charles I This rare 7in (18cm) slipware jug, with fleur-de-lys style motif and linear decoration, bears the motto Feare God 1630. Made on the eve of the English Civil War - and among the few dated pottery objects from the time - it was found by the vendor while excavating on a Welsh farm. Its grubby condition is shown clearly in a series of four photographs taken shortly after its discovery. However, save some large chips to the foot, it had survived its centuries underground relatively unscathed. It merited a bid of £3000 (estimate £1000-1500) at Sherborne, Dorset auctioneer Charterhouse on December 14.