The art market focus in the Big Apple at the moment is on Asian works as Manhattan’s galleries and major auction houses stage the latest edition of ‘Asia Week New York’. This ten-day fest of dealers’ shows and specialist auctions dedicated to Chinese, Japanese, Korean, Indian and Himalayan art and objects runs until March 23.

The 48 participating galleries are a mix of those resident in New York and others who have set up in locations across the Upper East Side for the occasion to mount selling shows. Half a dozen auction firms also take part, holding sales series ranging from single auctions to runs of eight or nine.

Pictured here are four of the highlights coming up at different auctions during Asia week, while further highlights appeared in ATG’s latest print edition. Included in Doyle’s March 18 sale of Asian works of art is this underglaze blue and iron-red decorated porcelain fish jar dated to the Qing dynasty and probably Kangxi or Yongzheng period. It is painted with eight swimming carp and measures 12.5in (32cm) high. The estimate is $20,000-30,000. Among the nine sales in Christie’s Asian series is its March 20 auction of Indian, Himalayan and Southeast Asian works of art. The 131 lots include a selection of Himalayan bronzes and paintings from the estate of Baroness Eva Bessenyey (1922-2018) described by the auction house as “a woman who expressed her independent spirit through a love of languages, horses and, above all, travel”. 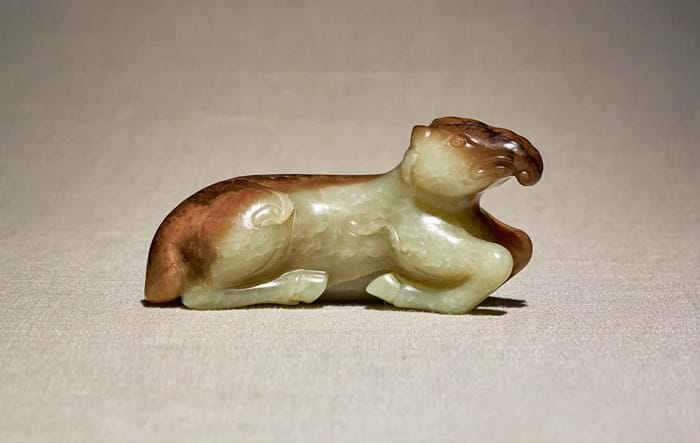 This features a menagerie of jade animals and figures spanning the Song to Qing dynasties and includes this 3.75in (9.5cm) long pale yellow and russet stone carving of a tapir dated to the Song-Ming dynasty which has an estimate of $80,000-120,000. Work by some of India’s best-known avant-garde artists feature including Francis Newton Souza’s painting from 1948, Golgotha in Goa. The 3ft (90cm) square oil on plywood, which is signed titled and dated FN Souza Golgota in Goa (sic), 1948 on the reverse, is estimated at $250,000-350,000.

Ahead of the field