LS Lowry’s (1887-1976) painting of a back-street cricket match in Salford from 1938 is among the stand-out lots offered at Sotheby’s this summer. Ahead of the sale, it was unveiled today at The Lowry in Salford – a public gallery not far from the Old Trafford Cricket Ground – where it will remain on view until May 27. Although its subject matter makes it somewhat unusual, A Cricket Match is stylistically a trademark Lowry painting. It has not been on the market since it sold in the same saleroom 23 years ago.

The painting has come to auction from the collection of Manhattan collectors Neil and Gina Smith. Although based in the US, where he met Gina, Neil was born and raised in Greater Manchester. Other pictures in their collection include works by John Constable and Pieter Brueghel the Younger which will be offered at Sotheby’s Old Master sales in London in July, while a single-owner sale of the Smiths’ furniture and silver will also be held on July 3.

Lowry’s market has undergone a dramatic shift in the last two decades and, if it sells at or above mid-estimate, it will become the 23rd work to sell for over £1m – a phenomenal record for a painter regarded as a ‘people’s artist’.

The commercial realities of the modern market mean that works such as A Cricket Match are extremely valuable. Here we pick five sales demonstrating the way Lowry prices have risen over the intervening period since the painting was last on the auction block. Sold at Christie’s in November 2018, A Northern Race Meeting was described by the auction house as “a unique painting in the artist’s oeuvre depicting a day out at the races”.

The 2ft 6in x 3ft 4in (76cm x 1.02m) oil on canvas was painted in 1956 and was purchased by the vendor’s father in the same year. As with a 1922 drawing of a racing subject (now in the Manchester City Galleries), the focus of the focus of the painting was not the actual horse races themselves but rather the characters walking through the ground and huddling around the bookmakers’ stalls and news stands. Offered at Sotheby’s sale of the AJ Thompson collection of works by the artist in March 2014, Lowry’s painting Piccadilly Circus, London was appearing at auction for the second time in three years.

Thompson, the owner of a family-run recycling business in Newmarket, had bought it at Christie’s in November 2011 when it was knocked down at £5m, setting a joint record. Reappearing at Sotheby’s following Thompson’s death the year before, the 2ft 6in x 3ft 4in (76cm x 1.02m) oil on canvas from 1960 still did pretty well in spite of its relative lack of market freshness, selling at £4.5m. 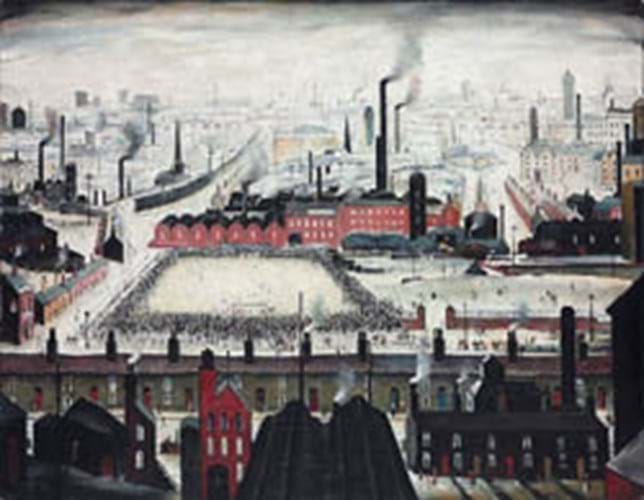 Only a few works by the artist feature football matches. The last Lowry painting with such a subject offered at auction had been Going to the Match which made £1.75m at Sotheby's in December 1999 and was bought by the Professional Football Association.

At Christie’s, The Football Match was estimated at £3.5m-4.5m but was eventually knocked down at £5m. Agecroft Regatta by LS Lowry set a new high for a work on paper by the artist when it was knocked down at £175,000 at Bonhams in May 2013.

Depicting a boat race in Salford – a more unusual subject for the artist whose favoured topic was gritty industrial scenes – the 10 x 14.5in (27 x 37cm) pencil sketch was signed and dated 1942. Showing the big money Lowry can make even for smaller works, The Hawker's Cart, an oil on canvas from 1929, drew strong competition at Edinburgh saleroom Lyon & Turnbull in June 2011.

The 21 x 19in (54 x 40cm) work was made not long after the artist finished attending the Salford School of Art. While typical of the many urban landscapes Lowry produced, it had the key commercial ingredients of numerous figures and an industrial setting.

It was being sold by the Royal Scottish Academy in order to use the money raised from selling the work to purchase Scottish art.