The J Paul Getty Museum in Los Angeles has emerged as the buyer of two major works: Corpus Christi, a small, 15th century wooden sculpture by Veit Stoss, and Two Boys with a Bladder (1769-70), a painting by Joseph Wright of Derby. 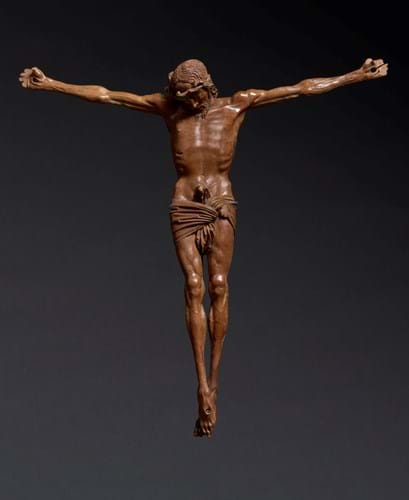 Corpus Christi by Veit Stoss was sold at Sotheby's for £1.14m to a buyer now revealed to be the J Paul Getty Museum in Los Angeles. Photo: The J Paul Getty Trust.

Made c.1490-1500, the 13in tall figure by Stoss shows Christ crucified, wearing a crown of thorns. The figure’s curling hair and beard, swollen veins and drapery folds are rendered with expressive yet accurate detail.

Though the artist was known as the ‘Master of Crucifixes’, this is the only known small-scale example of the subject he produced and is thought to have been used for private devotion.

It appeared at Sotheby’s Old Master sculpture and works of art sale in London last July, where it sold for £1.14m including buyer’s premium.

Two Boys with a Bladder was offered on the stand of Lowell Libson & Jonny Yarker at TEFAF Maastricht in March.

Probably designed as a pair with another of Wright’s candlelight paintings, Two Girls Dressing a Kitten by Candlelight, it had not been seen in public since the 18th century and was unknown to scholars until its rediscovery by the dealership.

It is a classic example of Wright’s work, the earliest in a series of dramatic nocturnal paintings that include The Experiment on a Bird in the Air Pump now in London’s National Gallery.