One of the highest-ever totals for an art auction in Ireland was set last week when the sale of the Ernie O'Malley collection held by Dublin saleroom Whyte's in association with Christie's raised a premium-inclusive total of €5.42m (£4.65m). ‘Reverie’, a painting from 1931 by Jack Butler Yeats. It sold for a record €1.4m (£1.2m) at the sale of the Ernie O'Malley collection held by Whyte's in association with Christie's.

Exceeding expectations of €3m, the 100-lot auction at the Royal Dublin Society on November 25 was a white-glove affair with every lot finding a buyer and most works contested above estimate.

The total was only behind the premium-inclusive €5.6m generated by the larger mixed-owner Irish art auction held by Bonhams & Adams in December 2006.

Reverie from 1931, a 2ft x 3ft (61 x 91cm) signed oil on canvas showing a figure in a railway carriage, led the sale when it was knocked down at €1.4m (£1.2m) to collector in the US. The price was also a record for any picture sold at auction in Ireland.

The vibrant colouring, figurative subject, good date and attractive provenance all gave it substantial appeal. Yeats travelled by rail across Ireland extensively throughout his career and his friend O’Malley, who acquired this painting directly from the artist in 1945, wrote of how “the shifting scene” in the work is “temperamental and induces mood” with the landscape visible through the window symbolic of the figure’s thoughts and imagination. Also bringing a strong competition and selling to the same buyer at the O'Malley sale was Evening in Spring from 1937 which depicts a group of figures sat around a dining table, believed to be a Yeats family dinner in Sligo. Another work that O’Malley bought it from the artist in 1945, it overshot an estimate of €500,000-700,000 and was knocked down at €1.3m (£1.12m).

The works came to auction directly from O’Malley's family. He was a leading Irish revolutionary and an officer Irish Republican Army during the Irish War of Independence who went on become a writer, publishing two books detailing his experiences.

After his marriage (and subsequent divorce) to American heiress and sculptor Helen Hooker (the sister-in-law of JD Rockefeller), he devoted himself to the arts and championed many Irish painters including Yeats who became a close friend after the two men met in 1937 at the home of the historian Constantine Curran. 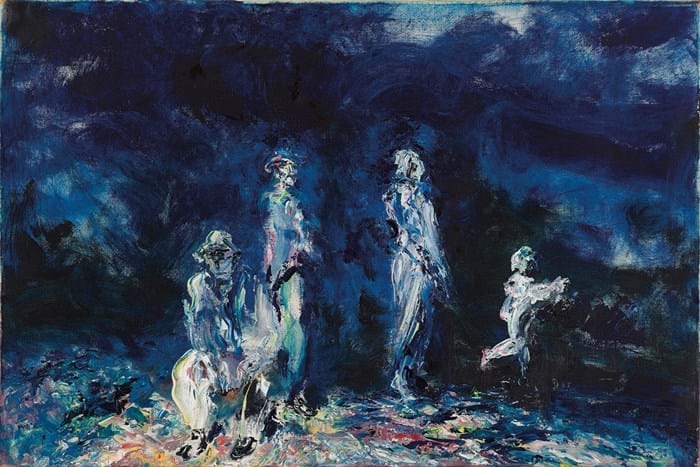 Overall the 45 Yeats lots at the sale, which included a group of drawings and watercolours, raised a hammer total of £4.11m, contributing the bulk of the sale’s total.