Industry news from across the auction houses and dealers. Lyon & Turnbull will launch its new auction of traditional painting and sculpture in London next month. The inaugural Classic Tradition sale on October 30 comprises British and European art from Old Masters to the 19th century.

The auction, to be held at 10-11 Carlton House Terrace, has been put together by Rohan McCulloch, L&T’s head of British & European art who joined the firm in January from Chiswick Auctions.

L&T, that marks its 20th anniversary at Broughton Place in Edinburgh later this year, is planning a series of London auctions including a second Modern Made sale on November 14. Newly launched A&C Auctions of Pendle in Lancashire will hold its first auction on October 16 of antiques, collectables and pictures. It plans to hold a sale every month. The firm was founded in Burnley by two dealers James Knowles and Alan Hirst. The pair have been trading under the name Lancashire Fine Art for the past 15 years specialising in paintings, watercolours, bronzes and antique religious artefacts.

Knowles said: “This company will continue to trade and we see A&C Auctions as a natural extension of our existing business. With the advent of live internet bidding we have decided it is the right time to cross-over into auctioneering, still with art at its core but moving into other areas such as Chinese ceramics and artefacts, European ceramics, affordable jewellery, militaria and collectables.”

However he said the firm will not deal in furniture. Forum Auctions has relaunched its wine company bidforwine.co.uk. Among the lots to be offered on September 24 is this three bottle Krug presentation case (2004), estimated at £700-1000.

Forum Auctions has relaunched its wine website bidforwine.co.uk after buying it in February 2018.

It is led by wine specialist Richard Brierley, previously at Sotheby’s and Christie’s.

The platform has relaunched with larger sales up to 400 lots, an increase on the previous 150-200 size. It plans an average of two sales a month with an extra sale before Christmas.

Its sales will also now be hosted on thesaleroom.com. Golding Young & Mawer has opened a valuation and consignment office in Leicester, to cover the Midlands area. It has appointed auctioneer and consultant Richard Plant to run the office in Stoughton, east Leicester.

It is the first valuation office established outside of Lincolnshire for the firm.

Golding Young & Mawer operates salerooms in Grantham, Bourne and Lincoln and valuation offices in Louth and Stamford. It also has access to an office facility in central London on a by-appointment basis. Harper, who has been a regular on TV including on BBC shows Bargain Hunt and Antiques Road Trip, has lined up 24 dates through to February to talk about his experiences behind the scenes.

He said: “For many years, I’ve been giving talks such as after dinner events and I always enjoy them, so the next stage was to take what I do on tour through theatres… People were interested in how things were put together, making the TV shows, how things could go wrong and the celebrities I had worked with.

People also like to hear stories of the TV disasters, the antiques profits, the bigger losses, the fakes and the fabulous.” 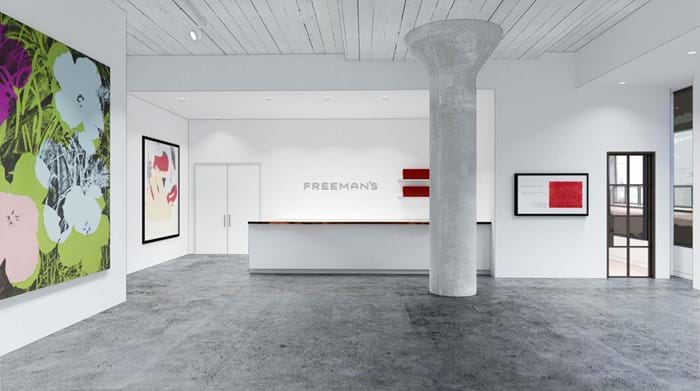 The reception at Freeman’s of Philadelphia new saleroom.

Freeman’s of Philadelphia, the oldest continuously-run auction house in the United States, is to move from its home of nearly 100-years to a newly refurbished building overlooking the city’s Schuylkill River.

The firm sold its 1808 Chestnut Street premises, a six-story premises built for the auction house back in 1924, earlier this year and is leasing two buildings, still in the centre of Philadelphia.

Its main building at 2400 Market Street features a gallery and a saleroom above 5000 sq ft of office space.