Christopher Dresser vase, Live Aid poster and photographs of the Queen are among five auction highlights that caught bidders’ eyes

ATG’s selection of hammer highlights this week includes an original poster of Live Aid from 1985 that made nearly 10-times over estimate. This original poster marks Live Aid, the duel-venue benefit concert held simultaneously at Wembley stadium in London and the JFK stadium in Philadelphia on July 13, 1985. It was estimated at £250-350 at Excalibur Auctions on April 25, and sold at £3400.

This original poster marks Live Aid, the duel-venue benefit concert held simultaneously at Wembley stadium in London and the JFK stadium in Philadelphia on July 13, 1985. Designed to raise money for the relief of the ongoing Ethiopian famine, the ‘global juke box’ was the most ambitious international satellite television venture to date with an estimated audience of 1.9 billion.

Original Live Aid posters (there are several designs) are not too hard to find but this example (above) offered at the Movie & Music Memorabilia sale at Excalibur Auctions on April 25, carries three authenticated signatures: those of the poster artist Peter Blake and those of Midge Ure and Bob Geldof, the organisers of the Live Aid event.

A great momento of perhaps the greatest benefit concert of all time, it took £3400 (estimate £250-350) via thesaleroom.com.

2. Set of portrait photographs of the Queen This set of nine portrait photographs of the Queen were used for Canadian bank notes in the 1960s. The images, taken by court photographer Anthony Buckley (1912-93) in 1963, were offered by online auctioneers William George with an estimate of £5000-8000, and sold at £13,000 (plus premium) in a sale that closed on April 23.

This set of nine portrait photographs of the Queen were used for Canadian bank notes in the 1960s. The images, taken by court photographer Anthony Buckley (1912-93) in 1963, capture the 37-year-old monarch in a variety of different poses.

Once approved by the monarch, they were presented to the Security Printers and the Crown Agents for Overseas Governments and Administrations, which distributed images of the monarch for use in bank notes, coins and postage stamps across the British Commonwealth. The photographs were later adopted into the design of Canadian currency.

It is rare that pictures used for official purposes, come on the market. A set of the photographs, which each measure 8 x 10in (20 x 25cm), were donated to the National Portrait Gallery as part of the Anthony Buckley archive in 1995.

These were offered by online auctioneers William George on behalf of a private collector in Peterborough. Guided at £5000-8000, they sold at £13,000 (plus premium) in a sale that closed on April 23. Christopher Dresser cluster vase offered at Richard Winterton in Lichfield on April 27 with a modest guide of £100-150, sold at £1900.

Unlike his more formal creations for the Minton factory, Christopher Dresser enjoyed free rein when creating designs for something like 1000 pots while working as Art Superintendent at Linthorpe from 1879-82. He drew upon a wide range of influences including Minoan, Cycladic, Fijian, Chinese and Japanese ceramics as well as locally-found prehistoric and Bronze Age artefacts.

This particular vessel with its cluster of bottles around a central conical vase impressed with an impressed signature mark and the shape No.330 is one of several well-known Linthorpe models that owe a debt to pre-Columbian art. Although intended for mass production they were made in small numbers.

Offered for sale at Richard Winterton in Lichfield on April 27 with a modest guide of £100-150, sold it took £1900 from a bidder using thesaleroom.com. Form, colour and condition are defining criteria in the oak market - and unfortunately this 17th century oak ‘credence’ offered by Claydon Auctions in Middle Claydon, Buckinghamshire on April 27 was a lacking on at least two fronts.

This barn find was green with moss and had several areas of rot and decay. It was however, a rare form c.1630. The term ‘credence’ table is today associated with church furniture, and specifically a table used in the celebration of the Eucharist, but originally these folding tables would have been placed beside the main dining table in royal or noble houses for the ceremonial tasting of food and drink before eating.

Although in a sorry state from its outdoor life, it will reward some sensitive restoration - as evidenced by a bidding battle that rose from the £100 low estimate up to £1550. 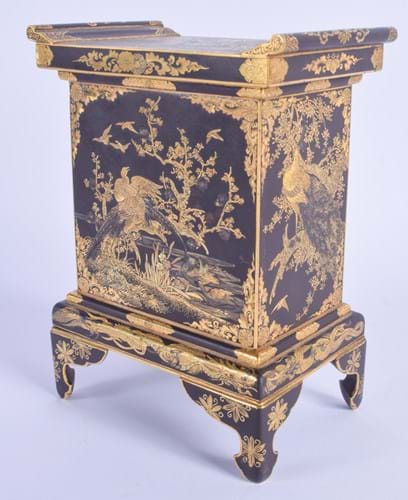 Estimated at £2000-3000, this Meiji period iron and gold inlaid miniature cabinet sold for £11,000 at Hannams in Selborne, Hampshire on April 27. The winning bid came via thesaleroom.com.

Standing just 6in (15cm) high it is nonetheless larger than many similar miniatures and is wonderfully inlaid with birds, dragons and foliage. The decoration is attributable to Komai Otojiro (1842-1917), the great metalwork artist who swapped a career making sword fittings in the closing days of the Tokugawa shogunate for a business making decorative damascened ironwares for wealthy European and American travellers.

Taking his inspiration from the popularity of small-scale cabinets and boxes made from lacquered wood, a favourite with globe-trotting visitors by the 1880s, Komai focused production on these miniature furniture-shaped pieces with decoration executed in nunome zōgan, (cloth-texture inlay).