Among the high-season sales traditionally staged in Paris in the early summer is a selection of auctions devoted to modern design. As predicted, the top seller in Sotheby’s design auction was the hippopotamus bathroom set (pictured above) designed as a one-off by François-Xavier Lalanne (1927-2008).

The three-piece set was commissioned from the designer in the early 1990s by the vendor, a grandson of the Swiss animalier sculptor Edouard-Marcel Sandoz, who was inspired by a hippopotamus bathtub in blue resin that Lalanne had created for Marcel Duchamp and his wife Teeny.

The set, which is made from copper, gilt metal and patinated bronze, wood and ceramic, takes the form of a family of hippos with the ‘mother’ forming the bathtub/sink unit, and the two ‘children’ fashioned as a bidet and toilet. It sold for a hammer price of €1.75m (£1.59m) at the auction staged on June 25. Another notable result in the same sale was the double estimate €1.2m (£1.09m) paid for Alberto Giacometti’s 22.5in (57cm) high Aigle vase of c.1934 in painted plaster with the original zinc liner. 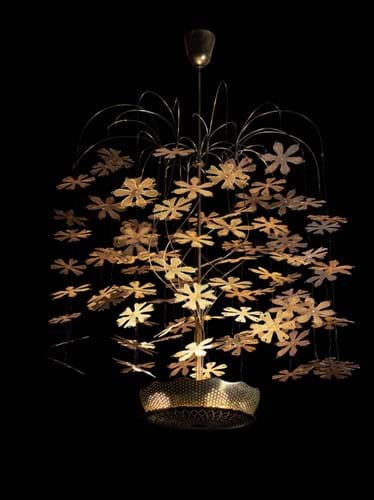 The one-off model from c.1947, which has 96 snowflake light elements, sold to a European collector for a sum that was triple the estimate and surpassed the previous auction high for the Finnish designer of €238,400 including premium set in 2017 in the same rooms for his Snowball light fitting. A ‘Liane’ light fitting commissioned from Jean Royère for a Paris apartment– €1.3m (£1.18m) at Christie’s.

The six-light fitting was one of 19 lots commissioned direct from the designer in 1962 to furnish an apartment in the Paris suburb of Neuilly-sur-Seine, all of which sold. All the pieces were notable for their good condition (the wall light, for example, had retained the original Rhodoid shades).

The premium-inclusive price of Christie’s Liane light was €1.57m ($1.76m) which is just over the previous high for Royère of $1.75m including premium paid in May 2018 at Sotheby’s New York for an Etoile sideboard.