The awards shortlist for Asian Art in London’s East Asian section have been announced. These 10in (26cm) gold and silver inlaid bronze chariot fittings (above), skilfully cast in the zoomorphic form of a three-clawed dragon pursuing a phoenix, date from the Eastern Zhou period c.3rd or 4th century BC. The chariots for which they were made first appeared during the Zhou dynasty for the use of kings, their consorts, and other members of the aristocracy. It is possible that these fittings were made for an emperor, which might explain their unusually large size combined with their lavish decoration. It was from this time to the end of the dynastic period the dragon (emperor) and phoenix (empress) were symbols of imperial power.

They have a provenance back to CT Loo, Paris in 1930 and were subsequently owned by collectors including the Marquis de Ganay (Paris) and Stephen Junkunc III (Chicago). They carry a guide of £600,000-1m at Christie’s sale of Important Chinese Art on November 3. 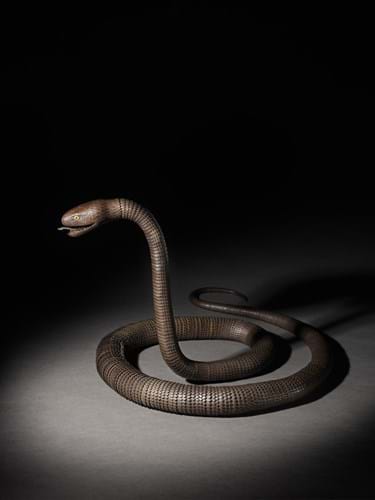 A 19th century iron jizai okimono of a snake signed by a member of the Myochin family from Sotheby’s.

This iron jizai okimono (lifelike, articulated animal figures) was created in the last decades of Edo-period Japan (1603-1868). At 10ft (3.03m) long it is of exceptional size, full of detail and is signed under the hinged jaw Tensho Ni-Seinen Myochin Sonshun Saku.  The Myochins were a distinguished family of samurai armourers who adapted their skills to create the moveable scales and limbs of jizai okimono, many of which were exported to the West. It has a guide of £70,000-100,000 in Sotheby’s sale of Fine Japanese Art on November 3. A large court painting of ladies playing go from Bonhams.

This large court painting of ladies playing go dates from c.1730s, the cusp of the Yongzheng and Qianlong periods. Measuring an impressive 5ft 1in  (1.55m) wide by 2ft 3in (99cm) high, the painting is notable for the striking similarity of style with the famous Screen of the Twelve Beauties at Leisure, in the Qing Court Collection in the Palace Museum, Beijing and may have indeed been executed by the same Court artists. It comes for sale by descent from ‘a distinguished Italian private collection formed c.1930s-1940s’ with an estimate of £60,000-80,000 at Bonhams’ sale of Fine Chinese Art on November 5. Michael Goedhuis offers Porte de la Paix Céleste I (2019) by Li Chevalier, an ink and mixed media work measuring 4ft 11in x 4ft 11in (1.5 x 1.5m). It has been shortlisted for the Apollo Award for Outstanding East Asian Work of Art from a Dealer.

Contemporary Chinese artist Li Chevalier was brought up during the Cultural Revolution and recruited by the elite Chinese Army Opera Orchestra, through which she met her husband, a French diplomat. The couple left China for Paris in 1984 and Li spent the following years studying at the Sorbonne and travelling in Italy. Informed by her earlier experiences, her paintings exhibit cross-cultural influences. For example, in this painting Porte de la Paix Céleste I (2019), offered by Michael Goedhuis, she combines Chinese ink with canvas and incorporates other mixed media elements such as sand and grit. Sue Ollemans offers this pair of 16th century Ming dynasty double gourd earrings, which has been shortlisted for the Apollo Award for Outstanding East Asian Work of Art from a Dealer.

This pair of 16th century gold hollow double-gourd earrings capped with lotus-leaf calyxes would have been worn by a noble woman during the Ming dynasty, as recorded in the Tianshui bingshan lu. Each earring was made by folding a beaten gold sheet into two globular sections with faceted sides and mounted between the lotus petals. Gold versions of the shape have been found mostly in the provinces of Liaoning, Gansu, Hangshu, Jiangshu and Sichuan. This pair is offered by jewellery specialist Sue Ollemans. This early Showa period writing box by Hiiraishi Takashi is offered by Simon Pilling and has been shortlisted for the Apollo Award for Outstanding East Asian Work of Art from a Dealer.

Simon Pilling offers this early Showa period (1930s) writing box by Kyoto-born artist Hiiraishi Takashi (1910-80). To the exterior are a weeping willow with plum blossoms executed using takamakie and kirikane inlay techniques. Inside is a modern and stylised interpretation of the traditional Japanese theme of the Seven Autumn grasses. It holds a silver chrysanthemum water-dropper, suiteki and inkstone.

The artist produced this work before changing his name to Hiiraishi Kosho around 1940. He worked as a professor at the Kyoto Municipal School of Arts and Crafts and went on to receive the Kyoto Municipal Order of Cultural Merit for his work in lacquer-ware. Examples of his work are in the Kyoto National Museum of Modern Art.

Find more about the event on the Asian Art in London Website.