ATG’s weekly selection of items that caught bidders’ eyes includes an Airfix scale model Attack Force battle set complete in its original packaging that made over 30-times estimate in Suffolk. This large 16in (40cm) high baluster faience vase, sold by Hansons in Teddington on June 27, is by ‘father of art pottery movement’ Joseph-Théodore Deck (1823-91). It includes the famous ‘bleu de Deck’ – the rich turquoise glaze copied from Isnik ceramics that Deck first showed in 1874 at the Union Centrale des Beaux‐Arts Appliqués à l'Industrie.

However, the decoration is unmistakably inspired by pottery from further east – and specifically the Japanese art that held such fascination to late 19th century Europeans. Deck became one of Japonisme’s great disciples. His obituary reported: “Deck died at Sèvres, in the little pavilion—with rooms of gold, satin, and velvet, filled with vases painted in manganese violet and yellow colours, lacquers, netsukes, and swords of Japan…. He was inseparable from his surroundings; he wore the air of their art and charm as if he had been born among them.” The sale at Lempertz in Cologne on June 27 included a group of netsuke that came by descent from the German publisher and politician Albert Brockhaus (1855-1921).

The provenance was important: Brockhaus was among the first Europeans to attempt a proper study of netsuke and was author of the first book on the subject Netsuke. The attempt at a history of Japanese carving  was published in several languages and in 21 editions published between 1905 and 2018.

Many of the pieces in the Lempertz sale were those illustrated in Brockhaus’ book including this Tamba school boxwood carving of a hare. Acquired by Brockhas in 1907 it has the signature to an oval reserve Toyomasa – perhaps for Naito Toyomasa (1773-1856), the best known of the carvers working in Tanba province at the end of the Edo period. This illustrated autograph letter by Ernest Howard Shepard (1879-1976) is signed and dated Long Meadow, Longdown, Guildford, 23 March 1935. It is written by Shepard in the guise of Winnie the Pooh and Piglet, to 'Buffkins' – the childhood nickname of the humanist Dr Harry Stopes-Roe (1924-2014), whose mother, the birth control pioneer Marie Stopes (1880-1958), was a close friend of the illustrator.

Shepard would often attend Buffkins' birthday parties, but occasionally might send one of these letters of apology.

The letter was sold at Dominic Winter in South Cerney on June 24-25 by the children of Harry Stopes-Roe and his wife Mary, née Wallis (1927-2019), herself the daughter of the scientist, engineer and inventor Sir Barnes Neville Wallis (1887-1979). Two of four photographs by Julia Margaret Cameron – £8000 at Duke’s.

Pictured here are two of four photographs by Julia Margaret Cameron (1815-1879) sold via thesaleroom.com for £8000 by Duke’s of Dorchester on June 25. The quartet of albumen prints, once forming pages from a photograph album, have a provenance to Caroline Byng Lucas (1886-1967) and her older sister Frances Byng Stamper (1882-1968).

Together the two established the Millers Gallery in Lewes, holding early exhibitions by Matisse, Cezanne and Pissarro, and the Millers Press, champion of colour lithographic prints in the post-war era.

The four photographs include one titled Connor of the Royal Artillery, Winner of the prizes at the Royal Artillery Games, Freshwater (for Gunner Patrick Connors) and another inscribed Mary Hillier and two children. The other two are both portraits of Julia Jackson, Cameron’s niece and the mother of Bloomsbury Group doyennes Virginia Woolf and Vanessa Bell. 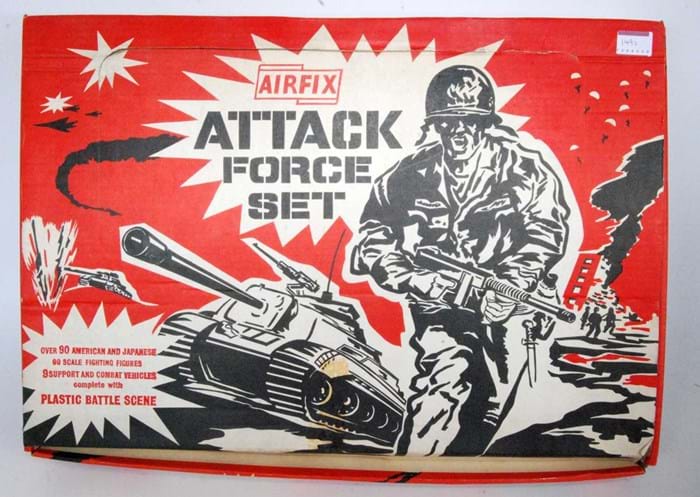 Toys from the Attack Force range are not the earliest of the Airfix models but they are perhaps the most desirable.

Airfix first began producing plastic scale model kits for the mass market in 1952 with the 1/72 scale Attack Force series following in the late 1960s. Made as cheap plastic toys in budget card boxes, they were hugely popular with a generation of children but seldom treasured. Today examples in original packaging are among the rarest known sets known to the collecting hobby.

This goes some way to explain the feverish competition for this battle scene gift set offered by Lacy Scott Knight in Bury St Edmunds, June 27. These sets, appearing in the Airfix catalogue of 1968, contain a quantity of various American and Japanese figures, vehicles and a plastic battlefield play base. Miraculously this set was housed in the original all-card lift-up lid box and included printed instructions. It was estimated to bring around £100 but the hammer price was £3100.