One to a lord about an Ottoman sultan, the other asking for six eggs - two very different letters from Florence Nightingale have emerged at salerooms in the UK and US. 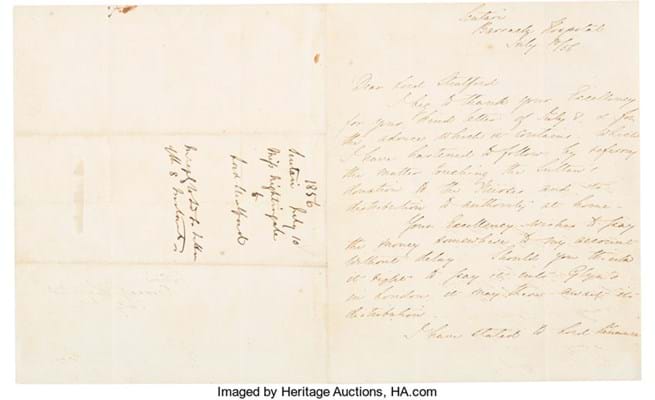 At Heritage of Dallas, Texas, an example estimated at $2000-plus is addressed to Lord Stratford de Redcliffe, with Nightingale expressing her gratitude for his advice in a recent letter to her, and promising to help distribute a large donation Sultan Abdulmecid of the Ottoman Empire made to the nurses and hospitals in response to efforts by Nightingale and other British nurses to improve conditions in hospitals during the Crimean War.

It is for sale in the Historical Manuscripts Auction on April 22.

In the UK, consigned for an auction postponed to a later date because of the coronavirus alert, Derbyshire saleroom Hansons will be offering a more down-to-earth letter left buried in a box of random papers for decades – about eggs.

Meanwhile, more Nightingale items are available to buy from dealer Peter Harrington as he marks the 200th anniversary of her birth.

Lady of the Lamp

Nightingale travelled in 1854 to Scutari, a district in Istanbul, with more than 30 nurses to care for those who were sick and dying. She helped to coordinate a Sanitary Commission that was brought in to address the sanitation and ventilation concerns, changes that had a significant impact on the death rate at the hospital.

After learning of her dedication, Abdulmecid made a sizeable donation to the nurses and hospitals, and presented Nightingale with a diamond and carnelian bracelet.

In the letter for sale at Heritage, Nightingale seeks Lord Stratford’s approval for her distribution of the donated funds, writing, in part, “I beg to thank your Excellency for your kind letter of July 8, & for the advice which it contains, which I have hastened to follow by referring the matter touching the Sultan's donation to the Nurses and its distribution to authority at home.” Detail of Florence Nightingale's signature on a letter about eggs to be offered by Hansons estimated at £500-600 in an auction postponed because of the coronavirus alert.

The letter about eggs, written in pencil 121 years ago in 1899, was taken along to Hansons prior to lockdown, for valuation. Its owner said it had been kept among his family heirlooms for decades.

Nightingale’s signature was the reason and her letter is now set to go to auction with an estimate of £500-600.

The note, signed and dated March 6, 1899, and written on headed paper - 10, South Street, Park Lane. W. -  says: "To the Aylesbury Dairy Co. Would you be so very good as to send me at once 6 eggs, if possible, laid this morning (or less than 6 if laid this morning) with the dark brown shells, for a gentleman very ill indeed, who fancies them - and to supply me with the same every morning for the gentleman who likes your eggs, & takes hardly anything. I will send them to him at once. Yours faithfully, Florence Nightingale. I shall be so much obliged to you."

The revised date of the Spring Fine Art and Library Auction has not yet been announced.

London dealer Harrington – operating via the website amid coronavirus safety measures – has for sale a book and a photo of interest to collectors interested in the Lady of the Lamp.

A first edition, second issue, copy of her Notes on Nursing book has the advertisement endpapers, dated 1864. Originally published six months before the opening of the Nightingale School at St Thomas’s Hospital in London in June 1860, this work was not intended to be a textbook per se but as a book of hints for those nursing in the hospital ward and in the domestic sick room. Nightingale provides practical descriptions of the nurse’s duties in supplying her patient’s needs.

This copy with an autograph letter signed from the author tipped in at the rear to Gaetano Meo, a painter, mosaic artist, and an artist's model associated with the Pre-Raphaelite movement, dated January 1887.

Harrington also offers a large-format cabinet photograph of Nightingale (pictured top), described as “one (and perhaps the largest) of only very few examples of a signed photographic portrait of Florence Nightingale to have appeared on the market, auction records recording no examples”.

This portrait, the likeness chosen to appear on the 1975 Bank of England 10 note, is the best known and most widely circulated image of Nightingale.

It has a detailed note of provenance, having been garnered by the noted American autograph hunter Charles Elmer Rice (1862-1939), whose autograph inscription appears on the verso of the mount and below the image on the album leaf: “Signed for me on May 15th 1903 - on my 2nd visit to her, in her home No 10, South Street, Park Lane, London - just after her 84th birthday anniversary - She died Aug 13th, 1910 - in her 92nd year, Chas. E. Rice.”