The first details of objects that dealers will exhibit at ‘TEFAF Online’ in September have been revealed. While TEFAF Maastricht, the flagship art and antiques fair that usually takes place in March, was cancelled for 2021 due to pandemic, it has been replaced by a digital edition of the fair which runs from September 9-13 (with an invitation-only preview on September 8). TEFAF’s ‘in-person’ fairs will resume with “a hybrid fair celebrating TEFAF’s 35th anniversary” next year (March 2022).

In the meantime, 11 new galleries have signed up for this online edition, bringing the total number of exhibitors to over 250.

In total over 700 works of art will be displayed digitally at the fair but earlier this week the organisers released a preview objects being offered by 18 of the dealers.

Here we pick out 10 objects that caught our eye.

1. Portrait of a young girl This portrait of a young girl holding buttercups with her dog beside her is by Dutch artist Drick Dirchsz van Santvoort (1610-80). Dating from 1632, the oil on panel was painted when the artist was 22 and is his earliest known dated portrait of a child.

It is offered by London dealer Richard Green at TEFAF Online. 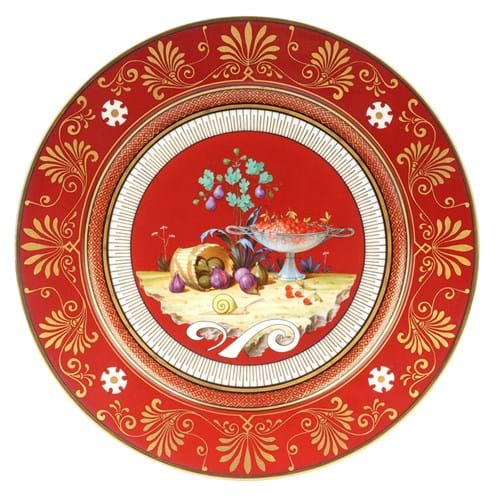 This piece of Sèvres porcelain was one of a set of 72 plates delivered to Jérôme Napoléon in March 1857 for his Pompeian Palace in Paris. It measures 9.5 (25cm) in diameter.

It is offered by Paris dealer Royal Provenance at TEFAF Online. Bailly Gallery of Geneva and Paris will display this table by Diego Giacometti (1902-1985) at TEFAF Online. A 15th century manuscript made for the King of France, Charles VIII, is offered by Jörn Günther Rare Books of Basel at TEFAF Online.

Life of St. Radegund, a manuscript on vellum from c.1496-98 illuminated by a Poitevin miniaturist dubbed the Master of St. Radegund, features representations of French monarchs among the miniatures. A pair of silver pair of wine coolers and stands by Paul Storr will be presented by London dealer Koopman Rare Art at TEFAF Online.

The coolers and stands from 1809 were originally owned by Richard William Penn Curzon-Howe, 1st Earl Howe. Measuring 14in (36cm) high, they have not been on the market since 1953. Kallos Gallery of London is offering a marble head fragment of a youth at TEFAF Online. The Roman head is derived Polykleitan sculptures encapsulating the physical ideal of a young man produced at height of Athenian classicism in the mid-5th century BC. This gold, silver and rose-cut diamond corsage ornament was made by Oscar Massin in c.1860. A superb example of fashion jewellery from the period, it is offered by Aardewerk Antiquair Juwelier of The Netherlands at TEFAF Online. This presentation jug from 1871 was created a symbol of German unification and was once owned by Germany’s first imperial chancellor Otto von Bismarck.

The 20in (50cm) ‘Thaler’ is offered at TEFAF Online by Daatselaar Fine Art & Antiques, a dealership based in Zaltbommel in The Netherlands. A portrait of a man writing by candlelight by Pietro Paolini (1603-1681) will be offered by New York dealer Adam Williams Fine Art.

The oil on canvas from c.1630 is a trademark example of the works by the follower of Caravaggio and an important addition to the artist’s oeuvre. The Goddess Ceres, Allegory of Summer, a sculpture by German artist Ferdinand Tietz (1708-77) who worked under five princely seats over his career, is offered by Julius Böhler Kunsthandlung of Starnberg, Germany.

More details of TEFAF Online can be found at tefaf.com.