With estimates from £200-20,000, here are seven previews of items coming up at auction this week. Henry Adams of Chichester, West Sussex, is offering a still-life by Reuven Rubin (1893-1974) on July 14. The Romanian-born Israeli artist moved to what was then Ottoman-ruled Palestine in 1912, later becoming the first Israeli ambassador to his native Romania.

This depiction of Daffodils and Iris (pictured above) was exhibited at the Arthur Tooth Gallery in London in 1938 and it has since descended through the family of the local vendor. The 2ft 4in x 20½in (72 x 52cm) oil on canvas is signed in English and Hebrew, as is the case with most of Rubin’s work. On July 11-12 Bearnes Hampton & Littlewood in Exeter will sell the collection of bygones, vernacular crafts and domestic metalwork formed by Robert Deeley. The auction is titled The Cauldron, the Spit and the Fire, after Deeley’s reference book of the same name published in 2011.

This ash and fruitwood cheese strainer on tripod splayed legs has an estimate of £200-300. This George IV silver-gilt mustard pot by John Bridge, London, 1825, is modelled as a laughing monkey standing next to a coopered barrel. The spoon is associated by also stamped for Rundell Bridge and Rundell and for London 1824.

A similar example was sold by Bonhams in 2008 as part of a collection of novelty silver animals. This one comes for sale at Woolley & Wallis in Salisbury on July 12-13 with expectations of £6000-8000. First edition of On the Various Contrivances by which British and Foreign Orchids are fertilised by Charles Darwin – estimate £1500-2000 at Lyon & Turnbull.

On the Various Contrivances by which British and Foreign Orchids are fertilised was Charles Darwin’s first published work after the Origin of Species.

He called the book a “flank movement” on the enemy as it tackled the question of design in nature. Orchid flowers were not beauty for its own sake, or created for the delight of humans, but adaptations to facilitate reproduction and cross-pollination by insects.

This first edition copy, one of 2000 printed by John Murray in 1862, is inscribed From the author in a clerical hand. It comes for sale at Lyon & Turnbull in Edinburgh on July 13 from the family of the British botanist, geologist and palaeontologist Prof Richard G West (1926-2020) with a guide of £1500-2500.

Example from a set of six late 17th century silkwork pictures to be offered at Rogers Jones estimated at £6000-8000.

Shown here is one example from a set of six late 17th century silkwork pictures to be offered in Rogers Jones’ Selections & Collections auction on July 16 in Cardiff.

They depict scenes from the Old Testament book of Tobit (Tobias), including ‘Tobias and the Angel’, ‘Tobias and the Fish’, ‘The Blinding of Tobias’, etc, with one additionally showing the Coat of Arms of Payer von Flaach of Schaffhausen and dated 1677, all in moulded walnut and oak frames with gilt slip.

From a private collection in Wiltshire, then by descent, Rogers Jones says they were “consigned via our Cardiff office, with Quiet Street Antiques”. A Victorian silver four-light candelabrum presented to a high-ranking British Army officer is among 160 lots of silver and objects of vertu in Tennants’ Fine Jewellery, Watches and Silver Sale on July 16.

It was made by John Mortimer and John Samuel Hunt of London in 1840 and presented to Lt General the Right Honourable Sir Edward Blakeney (1778-1868) by A Few Friends in Dublin. The estimate in the Leyburn, North Yorkshire, auction is £5000-8000. 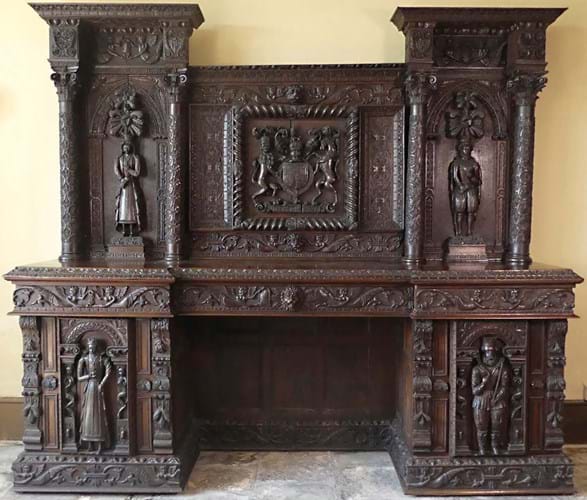 Sideboard from Sand, a historic house in east Devon – estimate £1500-2000 at Chilcotts.

Sand, a historic house in east Devon, is being sold for the first time in over 460 years. It has been in the Huyshe family since 1560.

Chilcotts of Honiton, also Devon, is selling a variety of items from the property which have been permanent fixtures at the house, including this intriguing sideboard.

An earlier house was rebuilt in 1594 by Roland Huyshe who, it is believed, installed a grand fire surround featuring oak panels and carvings. The house was remodelled by one of his descendants in the mid-19th century; it was at this time, the family surmise, that the overmantel was dismantled and the parts used to make an impressive sideboard. It has stood at one end of the Tudor Great Hall ever since.

A unique piece, it includes finely carved oak figures wearing the finest fashions of the late 16th/early 17th centuries, some of the original wall panelling, plus a centrepiece of the Royal Stuart coat of arms.