The Metropolitan Museum of Art was among those making purchases at TEFAF Maastricht as it opened for the first time in two years today. 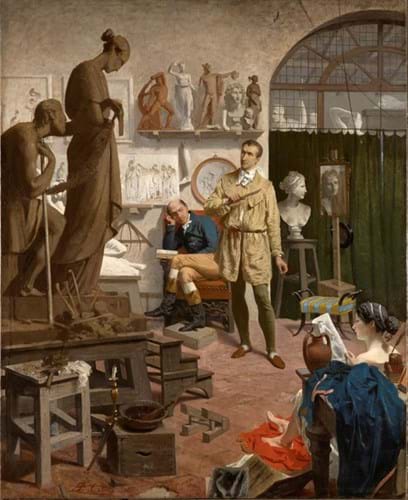 Trinity Fine Art sold a posthumous depiction of Antonio Canova surrounded by many of his sculptures by Pompeo Calvi (1808-84), which was ticketed at €180,000.

Standing for the first time on his own he said that he was “so nervous while driving here” thanks to the fair’s new dates and a punishing heat wave followed by rain on the opening morning. He echoed the misgivings of many exhibitors, but for him at least they were quickly allayed.

Indeed a good number of dealers agreed that while the numbers at the opening seemed comparatively small to those of previous years, the buyers that came were serious.

Several major transactions took place in the opening minutes. For example, one of the highlights on the stand of Trinity Fine Art, a posthumous depiction of Antonio Canova surrounded by many of his sculptures by Pompeo Calvi (1808-84), which was offered for €180,000.

Other big ticket sales included a Huanghuali games and tea table, c.1730-40, which first time exhibitor Thomas Coulborn & Sons brought as part of a larger exhibition of Chinese export furniture. It was priced at €100,000, and was joined by a wine cooler and a pair of engraved glass pictures. James Butterwick’s stand featured an exhibition with Modernism Inc on the modernist Ukrainian artist Oleksandr Bohomazov (1880-1930), with 15% of profits from the sale of the works going to the UNHCR’s Ukraine Emergency Appeal. Among his early sales was Rolling the Logs, 1928-29, which was offered for €150,000.

Rome’s Galleria Carlo Virgilio & Co, found a new home for a portrait of an unidentified sitter – the cover of its TEFAF catalogue – by Charles Mellin (1598-1649) for a six figure sum. It was one of three sales it made in the fair’s opening minutes –“so we can say the fair started well,” the gallery said.

Though TEFAF is known for its big-ticket offerings, there is still a trade in lower value – if still high quality – items. For example, Raphael Valls sold a small scene of a mosque by 19th century painter Jacques Pinque. Scenes like this -- good quality but by lesser or unknown artists -- are a speciality of dealer Toby Campbell who parted with the work for a four-figure sum. From that stand also went a small picture of some crabs, as well as a larger sale to a museum.

Elsewhere two pieces went from Daniel Katz: Adolescente, a c.1890 bronze by Émile-Antoine Bourdelle that went to an existing client, and a 12th century corbel in the form of a lion from the Tuscan artist Guillielmus to a new private buyer. The gallery reported seeing “all the right people” and said that, with two years since the last TEFAF the “quality was high” with choice items having been held back for today. Two manuscripts sold to a private collection from the stand of Dr. Jörn Günther Rare Books for more than €1m combined. One was Gregory IX’s Decretales, a large legal manuscript on parchment painted by the Maître Honoré and his workshop in Paris c.1281. The other was Boccaccio’s Lives of Famous Men and Women (Des cas des nobles hommes et femmes), painted on paper in Paris c. 1470. The gallery said it was “very happy indeed” with its first day. Boccaccio’s Lives of Famous Men and Women sold by Dr. Jörn Günther Rare Books with another manuscript for more than €1m.

Porcini found a new home for a pair of oil on slate paintings by Salvator Rosa (1615-1673), one of three pairs of works it brought to its stand.

Meanwhile Stuart Lochhead reported “serious interest” from an institution in a rediscovered alabaster sculpture from a French master from the atelier de Saint-Léger in Troyes.

The fair runs until June 30.