A new boss for Bonhams’ Knightsbridge saleroom is among the latest updates. He succeeds Jon Baddeley who is stepping back from management responsibilities after 50 years in the art and antiques world, 22 of them at Bonhams. Baddeley will continue to act as a consultant to the firm.

Haley has been head of fine books and manuscripts at Bonhams London since 2013, a position he will combine with his new role. He joined Bonhams' books department in London in 2004 and then worked in New York and Los Angeles with the auction house between 2008-12.

Haley said: “Under Jon Baddeley’s leadership the saleroom has gone from strength to strength, and he leaves us in great shape. Hewill be a very hard act to follow but I am relishing the challenge.” Jon Baddeley has stepped down from management at Bonhams and is now a consultant.

Baddeley will work as a consultant at Bonhams in the fields of science, technology and nautical works of art and will continue to be a specialist on the Antiques Roadshow where he has been for over 30 years.

Baddeley said he will now have more time to pursue his hobbies.

He added: “My stepping down from full-time management will allow me more time to pursue my other passions which include all aspects of cooking and procuring the ingredients for such, longhaul travel to search for unusual birds and animals in relatively inaccessible locations and sub aqua reef scuba diving (warm water only!).” Vintage clothing dealer Elena Jackson, who runs Foxtrot Vintage Clothing in Salisbury, has teamed up with auction house Ewbank’s as a consultant on vintage items.

As part of the new role she is putting together her inaugural Vintage Fashion & Textiles auction at Ewbank’s on July 28.

As well as a Versace micro collection (this month marks the 25th anniversary of the death Gianni Versace), highlights include Chanel, Hermès and Mulberry handbags.

Jackson said: “I have been immersed in this world for decades, met so many interesting people and have had a wonderful time developing my own business, so it was important for me to find the right company to join when it came to auctions. I am delighted to have that in Ewbank’s.” 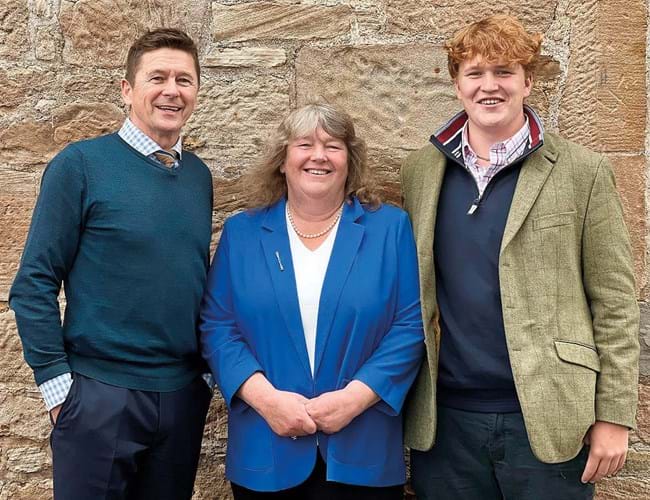 Michael Callan with Sybelle Thomson and her son Cameron.

The new firm has a total of 30 staff across four salerooms and offices and will focus on Ayr, the Ayrshire coast, the west of Scotland and the Glasgow area but will retain salerooms in Dumfries, Edinburgh and Carlisle as well as regional representation further afield. Sayn-Wittgenstein, an art historian and historian, has previously managed the Sotheby's branch in Hamburg for 18 years and more recently the Munich branch as senior director. Prior to these posts, she set up the Sotheby's representative office in Prague. She was also founding director at the Mucha Museum in the Czech capital. Auction house Phillips will open a new Los Angeles gallery this autumn in West Hollywood. The 2600 sq ft venue at 9041 Nemo Street has been designed by Formation Association and will host exhibitions, panel discussions and events.