Probably best to look away now if you are a Man Utd fan... Sergio Aguero shirt worn when he scored the late minute winner against QPR in 2012 to clinch the title - estimate £20,000-30,000 at Graham Budd Auctions.

Commentator Martin Tyler’s reaction captured the moment when Manchester City’s Argentinian striker scored a dramatic (to say the least) winner in the fourth minute of injury time to seal the Premier League title against QPR on May 13, 2012.

The blue No 16 shirt he was wearing when he secured the 3-2 win is coming up for auction.

Estimated to fetch £20,000-30,000 in Graham Budd’s auction on May 24, it even bears dry champagne spray marks from the dressing celebrations on the front and reverse. Sergio Aguero shirt worn when he scored the late minute winner against QPR in 2012 to clinch the title - estimate £20,000-30,000 at Graham Budd Auctions.

The auction house says the Aguero shirt will be offered with two signed letters of provenance - one from the seller and one from a former employee at Manchester City FC - that will be made available to the winning bidder.

In his letter the seller also confirms that he is not profiting from the sale of this jersey. The auction proceeds are to be divided between an individual in need of urgent and ongoing medical assistance, and two charities that this individual has supported and who have supported him during his prolonged illness: Testicular Cancer UK (‘checkemlads’) and the Stroke Association. For this lot Graham Budd Auctions has waived its seller's commission so that 100% of the auction proceeds will go to these worthy causes.

‘Kun’ Agüero is the fourth-highest scoring player in Premier League history, with 184 goals in 275 games; the league’s highest-scoring overseas player with nine more goals than Thierry Henry and Manchester City’s all-time top goal scorer. The club celebrated the 10th anniversary of the goal by erecting a statue to him outside Etihad Stadium last week. Wayne Rooney's boots, worn when he scored his first Premier League goal in October 2002, at the age of 16, in a match between Everton and Arsenal - estimate £5000-10,000 at Graham Budd Auctions.

Among more than 350 items relating to 30 years of the Premier League on offer at the auction will be Wayne Rooney's boots, worn when he scored his first Premier League goal in October 2002, at the age of 16, in a match between Everton and Arsenal. The estimate is £5000-10,000.

The saleroom says the uncle of the present vendor comes from a family that are long-time friends of Rooney’s family and in particular a friendship with Wayne’s uncle Richie, the main trainer at the  boxing gym at Croxteth Sports Centre. The vendor's uncle acquired the boots through Wayne’s brother Graham and they were then later signed by arrangement through Wayne’s father Thomas. 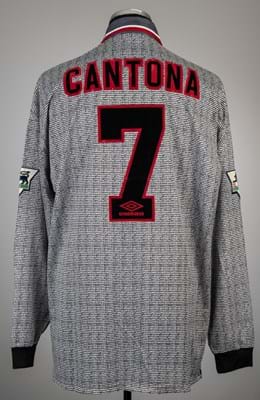 A notorious grey Manchester United shirt from 1996 worn by Eric Cantona is estimated at £10,000-12,000. Utd never won a game in the grey kit, losing lost four and drawing one, and in one game, against Southampton, Sir Alex Ferguson ordered the team to change to their third choice jerseys as the players were not recognising each other on the pitch when they wore the ‘invisible’ jerseys.

A pair of Cantona’s boots, presented personally to Lester Ellison, the Old Trafford dressing room attendant, is estimated at £5000-10,000. Vieira, who was named in the Premier League PFA Team of the Year for six consecutive years from 1999-2004, scored the opening goal but Utd ultimately won 4-2. The shirt also has the Stand Up, Speak Up badge which was only worn in one game.

Hand of God, money from human

The shirts may have some way to go before they make as much as Diego Maradona’s famous/infamous No 10 worn when he scored the hand of God, which sold on May 4 at Sotheby’s.

The shirt from Argentina’s 2-1 World Cup victory against England in 1986 took £6m (£7.14m including premium) – a record for any piece of sporting memorabilia.