Dominated as they were by furniture, the March sales at Lewes and Donnington Priory included other highlights. 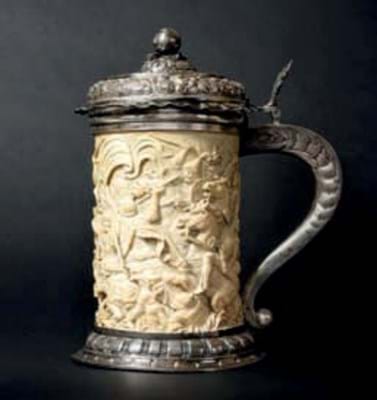 Probably from south-west Germany and dated to the 13th century, the 15in high x 2ft 6in wide (39 x 75cm) capital carved in high relief with stylised acanthus leaves and fruiting vines sold to a private UK buyer at £14,000.

This selection of 18th century south Staffordshire enamels, left, soared above estimate at Gorringe’s on March 28. It comprised two 4in (10cm) tall tea caddies printed and painted with figures by a river, classical ruins and trees within gilt metal borders, and two candlesticks standing 6¼in (16cm) and 10in (25cm) tall and painted with floral sprays.

The sticks had some damage and auctioneer Clifford Lansberry said: “I think the attraction was the caddies which I’d guess originated as a set of three.”

At Tennants’ sale, bronze and ivory were the most popular combination but a silver-mounted German tankard was also in demand. Standing 11½in (29cm) tall, the 19th century work in 17th century style depicting a battle scene went to an Italian buyer at £7200 against an estimate of £4500-5500.