Mark Twain said that his Conklin Crescent Filler fountain pen “was a profanity saver as it cannot roll off the desk”. 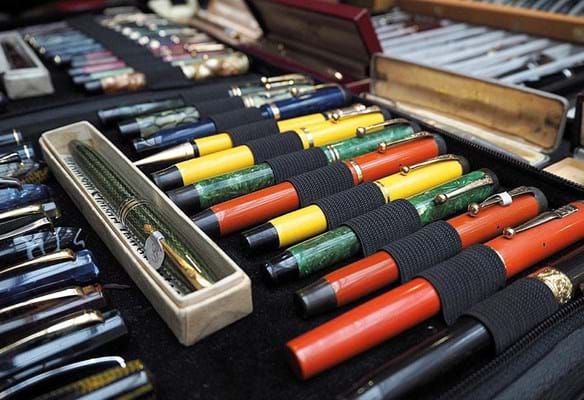 Meanwhile, Albert Einstein penned his works on special and general relativity using a Pelikan 100N, the first pen that did not cover the hands in ink when refilling, leaving less time spent washing it all off and more time to solve the mysteries of the universe.

Ray Walters knows all about vintage pens, as he has long been a collector, turning his passion into profit when he became a specialist dealer in 2012 and now sells examples priced from £20-3500.

Walters has a background in retail but now stands at pen shows across the world, as well as Adams Antiques Fairs at the Royal Horticultural Hall in London.

Giving his take on the vintage pen market, he says: “There has been a revival in the use of fountain pens over the past 10 years and more recently, the demographic by age seems to be getting younger.

“The revival is driven by the rediscovery of the use of the pen in the digital age, social media groups with special interests in fountain pens and handwriting, nostalgia and specialist pen shows in the UK.”

He adds: “In addition, a number of eminent collectors and experts have written books on the major brands. These include Montblanc, Omas, Pelikan, Parker, Conway Stewart, Swan Mabie Todd, Waterman, Cartier, St Dupont and Onoto.

“Parker Duofold by David Shepherd and Dan Zazove, and Fountain Pens for the Million: The History of Conway Stewart 1905-2005 by Stephen Hull are just two of these books. There is a parallel too with the watch market.”

Walters adds that he sells a wide range of pens at the ‘Horti’ fairs, and “vintage Parker, Montblanc and Pelikan seem to be the current favourites, particularly for gifts”.

“My own favourite pen has to be the 1950s Montblanc 146 celluloid with a 14ct gold flexible medium nib,” says Walters. “Collectors are looking for genuine, authentic and functional pens; condition is everything and pens can make tens or hundreds of pounds.”

Walters and his vintage – and modern pens – will be at the 140-dealer Adams Antiques Fair at the Royal Horticultural Hall on Sunday, December 10.

Young visitor numbers on the rise at Bloomsbury pen fair